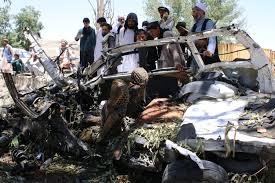 KABUL A suspected suicide bomber killed as many as 14 people in Afghanistan on Saturday and fighting between militants and security forces left at least 36 people dead on the first day of Islam’s holy Month of Ramadan.

In eastern Khost province, a Taliban attacker detonated a car bomb near a football field that is close to a military base, officials said.

“The bodies are not recognizable and it is hard to say if they are civilians or security forces,” he said.

Najib Danish, spokesman for the Afghan Interior Ministry, put the death toll at 13 killed and eight wounded, including two children.

Taliban spokesman Zabihullah Mujahid claimed responsibility for the Khost attack, saying it was aimed at members of the Afghan security forces.

A Reuters witness at the scene did not observe any military or police vehicles among those destroyed in the blast.

The fighting also left 33 militants and 17 civilians wounded, he said.

In Nangarhar province on Friday, some residents of Achin district rebelled against Islamic State fighters who have occupied much of that district, resulting in fighting that left 15 militants and six civilians dead, provincial governor Gulab Mangar said in a statement.

The Western-backed Afghan government is battling both Taliban and Islamic State militants around the country.

Taliban forces have increased their attacks in the weeks before Ramadan, with a string of strikes in Kandahar, Paktia, and Helmand, among other provinces.

Muslims around the world typically mark Ramadan with fasting, prayers, and other observances, although the holy month can begin on different days in different countries.