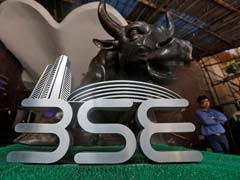 The scrip rose over 5 percent intraday on the BSE.

Out of 100 million-plus free subscribers, nearly 50 million have signed up for its ‘Prime’ membership by paying a one-time charge of Rs 99 and buying data packs, news agency PTI reported on Thursday.

The company has offered customers Prime membership on payment of one-time fee of Rs 99. Data packs for such members is available for as low as Rs 149 per month. Voice calls on Jio will remain free.

(Reliance Jio is a part of Reliance Industries that owns Network 18 Media & moneycontrol.com)

Larsen and Toubro, Reliance and Indian Oil were top gainers, while HDFC Bank, HDFC and Bharti Infratel were top losers on both the indices.

Shares of Reliance Industries hit a 52-week high ahead of the release of official numbers for the subscribers of Jio Prime.

(Reliance Jio is a part of Reliance Industries that owns Network 18 Media & moneycontrol.com)

1:23 pm Market Outlook: The Nifty is not far off from hitting fresh record highs and if everything falls in place, the index could well hit mount 10K in the next financial year which is nearly 10 percent from current levels, UR Bhat, Director, Dalton Capital Advisors said in an interview with CNBC-TV18.

Globalisation has played a crucial role in markets across the world and not just in India. “If there is a question mark on globalisation on account of restrictions on global trade will have a dramatic impact on international markets including India,” said Bhat.

US President Donald Trump will meet Chinese President Xi Jinping next week to discuss various issues from the difference over North Korea, to job losses.

1:05 pm Market Check: Sluggishness continued on equity benchmarks after a rally during the week as investors may have booked profits.

Reliance, Larsen & Toubro, Indian Oil and Hindalco were the top gainers, while HDFC Bank, Bharti Infratel and Bharti Airtel were the top losers.

12:57 pm Economy growth: The effect of demonetisation is fading and growth is likely to return to the pre-note ban stage, but a clearer picture of the economy will be available by June-end, S&P Global Ratings said today

. “India’s effects from demonetisation are fading and a return to the growth path prevailing before the currency note swap looks to be increasingly likely.

This should be a two-quarter event, meaning things will become clear by mid-2017,” S&P said. India had demonetised 500 and 1,000 rupee notes on November 8, 2016, and asked holders of such notes to deposit them in banks.

12:47 pm Interview: Ekta Kapoor and Sameer Nair of Balaji Telefilms spoke about ALTBalaji’s digital launch and how they plan to fight, survive and grow in the digital space.

Speaking about business, Nair said that they are looking at a breakeven of 4-5 million subscribers in three-four years.

He further said that in a year we will do 32 shows of up to 12-15 episodes each. However, we will be also creating content for children, added Nair.

12:35 pm Interest rates: The government has lowered interest rates on small saving schemes like PPF, Kisan Vikas Patra and Sukanya Samriddhi scheme by 0.1 per cent for the April-June quarter, a move that would prompt banks to cut their deposit rates.

For April-June, these have been lowered by 0.1 per cent across the board compared to January-March. However, interest on savings deposits has been retained at 4 per cent annually.

Since April last year, interest rates of all small saving schemes have been recalibrated on a quarterly basis.

12:20 pm Buzzing: Ahead of a Cabinet meeting to discuss change in urea subsidy, shares of fertilizer companies witnessed a rally.

Shares of Zuari Agro, RCF, GSFC, and National Fertilisers, among others, were up between 4 and 14 percent intraday on Friday.

The Cabinet meeting will be held to discuss changes to urea subsidy for production in excess of reassessed capacity.

12:05 pm Market Check: Equity benchmarks remained under pressure in noon but broader markets outperformed due to rally in metals and fertiliser stocks.

The BSE Midcap and Smallcap indices gained 0.6 percent each as about three shares advanced for every two shares falling on the exchange.

11:52 am SBI’s new look: From April 1, the associate banks which will be merging with State Bank of India will sport the lender’s signage and logo, with its iconic keyhole set against the background of navy blue.

The move is part of the bank’s larger goal to project a unified image, which will see all the five associate banks speaking the same language.

The SBI logo symbolises its role of a custodian that will keep customers’ money safe.

11:44 am SpiceJet readies for regional connectivity scheme: SpiceJet has added three Bombardier Q400 planes to its fleet to fly on routes under the government’s Regional Connectivity Scheme, an official from the listed airline told Moneycontrol.

With the latest induction, SpiceJet now has 33 Boeing B737 next generation planes and 20 Bombardier Q-400s.

11:24 am Management Speak: Satya Narayanan R, Chairman & Executive Director, CL Educate said we are building on the foundation and getting ready for the next phase of growth in the education sector.

The education company operates across segments in the learning industry and in present over 150 locations. “Our execution model is built on entrepreneurial energy,” said Narayanan.

He said, “We have geographical entrepreneurs in terms of business partners, who run with as much ownership and commitment as an entrepreneur can do, in 150 locations.”

11:10 am Market Check: Equity benchmarks saw a downtrend on the first day of April series as investors may have booked profits from the rally seen over the past few sessions.

Tata Steel, Reliance, Indian Oil and Hindalco were top gainers on both the indices, while HDFC Bank, ITC and Bharti Infratel were top losers.

CL Educate saw a tepid listing on Friday. The stock price opened at Rs 402, down sharply by 20 percent from its issue price of Rs 502 per share.

The stock recovered from day’s low and locked at 5 percent upper circuit at Rs 422.10 on the NSE, but still far below its issue price.

10:31 am Market Outlook: Sundaram Mutual Fund believes that the party on the market will continue.

The Indian economy seems to be well on track, GST is going through smoothly and liquidity and interest rate environment is good, S Krishna Kumar, CIO- Equity at Sundaram Mutual Fund, told CNBC-TV18 in an interview. He expects the current positive environment continue and the markets will also build on that.

Going forward, Kumar sees huge mergers and acquisitions (M&A) activity and that should be used as an opportunity. The deals could be spread across sectors, particularly on the financial side.

10:05 am New Listing: Education company CL Educate saw a tepid listing on Friday. The stock price opened at Rs 402, down sharply by 20 percent from its issue price of Rs 502 per share.

The stock recovered from day’s low and locked at 5 percent upper circuit at Rs 422.10 on the NSE, but still far below its issue price.

CL Educate operates across segments in the education industry, including test preparation and vocational training.

10:00 am Market Check: Equity benchmarks remained volatile in morning due to lack of global as well as domestic cues. Investors awaited fourth quarter earnings due next month.

9:55 am Listing: CL Educate settled at Rs 402 in pre-opening session, down a whopping 20 percent from its issue price of Rs 502 per share.

The research firm expects the Nifty to reach 9,500 in 12 months and 10,200 by 2018-end as earnings recovery gathers pace driven by 12 percent and 15 percent profit growth this year and next, he says.

The market breadth was also positive as about 1154 shares advanced against 464 declining shares on the BSE.

9:30 am UDAN: SpiceJet has added three Bombardier Q400 planes to its fleet to fly on routes under the government’s Regional Connectivity Scheme, an official from the listed airline told Moneycontrol.

With the latest induction, SpiceJet now has 33 Boeing B737 next generation planes and 20 Bombardier Q-400s.

On Thursday, SpiceJet and four other airlines won the bids to operate under the first phase of the scheme with funding assistance from the Centre and state governments. The five airlines have been awarded 128 routes (most of them exclusive) connecting 43 airports. The companies will have a three-year exclusivity on the routes.

9:15 am Market Check: The NSE Nifty started off April series on a lower note amid consolidation and mixed Asian cues Friday, weighed by banking & financials stocks.

The Indian rupee has opened on a flat note at 64.92 against the US dollar.

Ashutosh Raina of HDFC Bank says the continued year-end portfolio flows getting absorbed by the intervention bids, continue in the USD-INR pair, with the pair trading close to crucial 64.80-64.85 per dollar technical level.

The dollar rose as a combination of technical trading and a theme of strong US economic data and potential weakness in the euro zone weighed down the continental currency.
Asia traded mixed on the last day of March, as investors digested a mixed set of economic data out of east Asia and President Trump’s tense tweets about his meeting with China’s Xi Jinping next week.