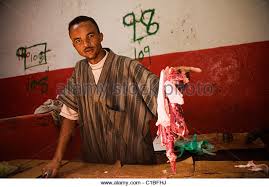 Abattoirs end strike on assurances of no Hindu party crackdown

NEW DELHI Abattoirs and meat sellers across India called off a four-day strike on Friday after the state government of Uttar Pradesh, the most populous state, gave assurances that mainly Muslim-run, unlicensed slaughter houses would not be shut down or attacked.

There had been fears that demands by right-wing Hindu groups to stop the slaughter of cows, considered holy in Hinduism, could stoke communal tensions with Muslims, who dominate the meat industry and make up 14 percent of India’s 1.3 billion people.

“We have decided to call off the strike after a meeting with the chief minister, who assured us that the state government will renew the licences of slaughter houses,” Chaudhary Aley Ummar Qureshi, a general secretary of the Muslim All India Jamiatul Quresh, told Reuters from Lucknow, the state capital.

“The government also assured us of protection from any arbitrary or unlawful crackdown.”

Hindu hardliner Yogi Adityanath ordered the closure of abattoirs operating without licences soon after taking over as chief minister of Uttar Pradesh on March 18.

Some supporters forcibly started shutting down meat shops and abattoirs, many of whose licences ran out years ago.

Traders will resume selling meat after the nine-day festival of Navratra, when Hindu devotees fast and stay away from meat, ends on Wednesday, Qureshi said.

In Modi’s home state of Gujarat, 1,000 people, mostly Muslims, were killed after a wave of Hindu-Muslim riots in 2002 when he was chief minister. A Supreme Court investigation found no case against Modi, who denied any wrongdoing.