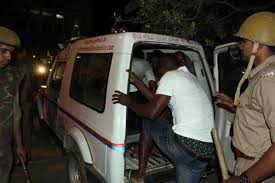 NEW DELHI Police arrested five people on Monday for beating up several Nigerian students in a Delhi suburb, the latest attack on Africans in the country.

The attack came after a protest at the death of a 19-year-old student allegedly from a drug overdose, media said. A mob attacked the Nigerians who were shopping in Greater Noida, a town in Uttar Pradesh, police official Sujata Singh said.

The crowd blames the Nigerian community in the area for supplying the drugs, according to media reports. Singh said the reason for the death of the student was as yet unknown.

Four of the students were badly wounded in the attack and taken to hospital. Television footage showed a scuffle with the crowd punching, kicking and beating people with heavy objects as they lay on the ground.

In a tweet on Tuesday, India’s external affairs minister, Sushma Swaraj, said that Yogi Adityanath, the newly appointed chief minister of Uttar Pradesh, had assured her of “a fair and impartial investigation”.