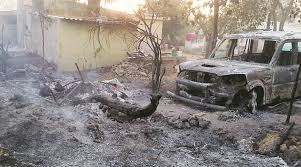 NEW DELHI One person was killed and about 14 injured when violence erupted following a scuffle between Muslim and Hindu school students in Prime Minister Narendra Modi’s home state of Gujarat, a senior administrative official said on Sunday.

A crowd of about 5,000 people attacked Muslim residents and set dozens of homes and vehicles on fire at Vadavali village in Patan district on Saturday after Hindu students complained of misbehaviour by Muslim students, said K. K. Nirala, the district’s top administrative official.

Members of the Muslim community retaliated by throwing stones and police used teargas and fired seven rounds to disperse the crowd and control the violence, Nirala said.

Gujarat has a history of serious communal trouble.

Rioters killed about 1,000 people, most of them Muslims, in the state 2002, according to estimates.

Modi was chief minister at the time and he was accused of turning a blind eye to one of the worst outbreaks of religious violence in independent India.

Modi denied any involvement in the unrest and in 2013 a panel appointed by the Supreme Court said there was insufficient evidence to prosecute him.

Nirala said the situation had been brought under control and three companies of the State Reserve Police have been asked to stay in the village to maintain peace.