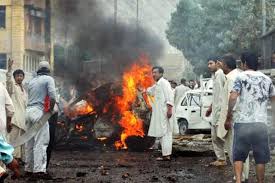 DHAKA At least three people, including a policeman, were killed and scores wounded in two separate bomb blasts on Saturday near a militant hideout that was raided by commandos in northeastern Bangladesh, police said.

The explosions in the Sylhet district came a day after a suicide bomber blew himself up at a security checkpoint near the country’s main airport in an attack claimed by Islamic State.

Two people were killed and more than 30 injured in one of the blasts near the hideout and a policemen died in the second in front of the building, police official Rokon Uddin said.

Several army and police personnel were among the injured, he added.

There was no immediate claim of responsibility.

Army commandos had stormed the hideout, which belonged to the local Islamist group, which has pledged allegiance to the Islamic State, blamed for the cafe attack in July last year in which 22 people were killed, most of them foreigners.

On Saturday, commandos rescued all 78 people trapped inside the five-storey building for more than a day in an operation that was still underway.

The raid came after a string of suicide attacks on security bases this month. A forensic report confirmed that Friday’s attack was a suicide blast that was the third incident involving explosives in the capital, Dhaka, in a week.

Islamic State and Al Qaeda have made competing claims over killings of foreigners, liberals and members of religious minorities in Bangladesh, a mostly Muslim country of 160 million people.

The government has consistently ruled out the presence of such groups, blaming domestic militants instead, though security experts say the scale and sophistication of the cafe attack suggested links to a transnational network.