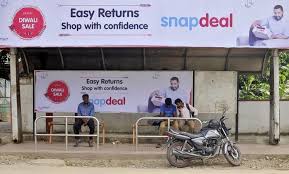 Snapdeal says not in talks for sale

The Mint report, quoting sources, said Snapdeal was in talks with Paytm E-Commerce Pvt Ltd and Flipkart for a potential sale.

“Snapdeal categorically denies having had any such discussion. The information is incorrect and without basis,” a company spokeswoman said in a written statement on Wednesday.

“We are making decisive progress in our journey towards profitability and all our efforts are aligned in this direction.”

Speculation that Snapdeal, backed by Japan’s SoftBank Group, will be sold has intensified in recent months after the company fired employees and saw its valuations drop steeply, while remaining far behind leaders Flipkart and Amazon.com Inc in market share.

The company said it is focused on turning profitable. Snapdeal had said there was no immediate need to raise capital unless it makes an acquisition.

SoftBank, run by founder Masayoshi Son, is the biggest shareholder in Snapdeal and has been speculated as a potential seller of its stake in the company.

A burgeoning Indian middle class and the rapid growth in high-speed internet has prompted buyers to shop online, boosting sales at e-tailers and making the country’s internet services market one of the world’s fastest growing.

Paytm E-Commerce Pvt Ltd, the online marketplace unit of electronic payments firm Paytm, has been seen as a potential acquirer after China’s Alibaba Group Holding picked up a 36.31 percent stake for $ 177 million, according to a regulatory filing earlier this month.