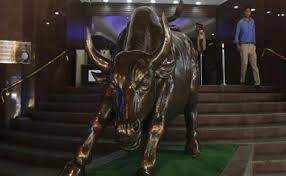 MUMBAI Indian shares, bonds and rupee are likely to gain when trading resumes on Tuesday as Prime Minister Narendra Modi’s landslide victory in Uttar Pradesh is seen as an endorsement of his economic reform agenda.

Modi’s win strengthens his claim to a second term in national elections in 2019, and investors are betting it will embolden the ruling Bharatiya Janata Party (BJP) to embark on more reforms including the launch of a national sales tax.

Analysts predict the broader NSE share index could test the psychological barrier of 9,000 points when markets re-open after a public holiday on Monday from its 8,934.55 close this week, while the benchmark 10-year bond yield could gain 3-4 basis points.

Modi’s win also paves the way for the NSE to approach a record high of 9,199.20 points hit on March 4, 2015, although worries about expensive valuations and caution ahead of a likely rate hike by the U.S. Federal Reserve at its March 14-15 meeting could temper gains.

Indian shares are trading at a price-to-earnings ratio of 19.85 over the next 12 months, compared with their five-year historic average of 17.8, according to Thomson Reuters data.

The BJP’s electoral prospects could also support bonds, which have steadied recently after hitting their lowest in around five months in late February after the Reserve Bank of India unexpectedly changed its monetary stance to “neutral” from “accommodative.”

Meanwhile, the rupee is set for further gains after hitting around a four-month high of 66.56 per dollar on Friday, as foreign investors have started returning to emerging markets including India, since February.