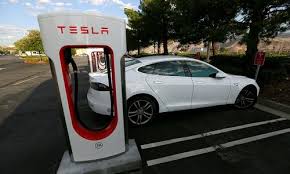 Short sellers have been at the losing end of a tug-of-war with Tesla investors in 2017, with some surrendering in recent weeks following nearly $ 2 billion in losses as shares of the electric car maker approach record highs.

Its quarterly report after the bell on Wednesday may offer fresh evidence for competing views about whether Tesla (tsla) will become a carbon-free energy and transportation heavyweight or be overtaken first by older, deep-pocketed manufacturers like General Motors (gm).

The stock has surged 41% since President Donald Trump’s November election, surprising many who predicted the company led by billionaire Elon Musk would suffer under a Republican government averse to supporting clean-energy companies with federal tax subsidies.

In 2017, traders have suffered paper losses of $ 1.95 billion betting against Tesla by shorting its shares, equivalent to 23% of the stock’s average daily short interest during that time of $ 8.5 billion, according to an estimate by S3 Partners, a financial analytics firm.

On Monday, short interest was $ 8.1 billion, down from a high of $ 9.5 billion at the end of January after some traders bought back shares to avoid additional losses, according to S3, a process known as short covering.

“People are covering like crazy. That’s why it’s gone up so much,” said Vilas Capital Management Chief Executive Officer John Thompson, who has been shorting Tesla for over a year.

Thompson said gains in other stocks in his portfolio have provided leeway to maintain his bet against Tesla.

Short interest in Tesla has receded from record levels of 22.2% in November, but remains elevated. At the end of January, 21.3% of Tesla’s outstanding shares were sold short, a higher portion than any other U.S. company with a stock market value above $ 10 billion, according to Thomson Reuters data.

Many investors believe that nearly 400 thousand pre-orders for the upcoming Tesla Model 3 sedan offer a glimpse of future strong demand for Tesla’s cars.

Critics say Musk’s targets for vehicle production are unrealistic and that investors underestimate how much additional equity Tesla may be forced to sell to keep the company going until it becomes regularly profitable.

Recent filing data shows mutual funds increasingly betting on Tesla. The number of funds reporting new positions in recent quarterly filings has jumped 79%, while the number of selling out dropped by 44%, according to Morningstar.