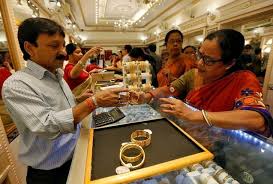 MUMBAI/BENGALURU Gold started trading at a discount to official prices in India on Friday for the first time in seven weeks, and buyers elsewhere in Asia held back purchases, waiting for rallying bullion prices to ease.

Gold crept higher on Friday as investors opted for its relative safety given uncertainty about U.S. and European politics and the direction of stock markets.

“The physical side has been very weak still, as people are hesitant in buying at these levels,” said Ronald Leung, chief dealer at Lee Cheong Gold Dealers in Hong Kong.

“We are seeing only those who are buying for investment purposes since Donald Trump came in January. (The) rest of them aren’t buying and (are) waiting for prices to come down.”

Dealers in India, the world’s second-largest gold consumer, were offering a discount of up to $ 1 an ounce this week from official domestic prices, compared to a premium of $ 3 last week. The domestic price includes a 10 percent import tax.

“The market is losing momentum due to the price rise. Prices need to come down below 28,500 rupees (per ounce) to boost demand,” said a Mumbai-based dealer with a private bank.

Gold demand in India will be muted this year after dropping to multi-year lows in 2016, as the government pushes to make the market more transparent and brings in a new tax, the World Gold Council (WGC) said.

“Demand has been falling after remaining robust for the past two-three weeks,” said Daman Prakash Rathod, a director at MNC Bullion, a wholesaler based in Chennai in southern India.

“Retail buyers are waiting for (a) price correction. Even jewellers have stopped re-stocking,” he said.

India’s gold imports in January fell 30 percent from a year ago to $ 2.04 billion.

Premiums in China, the top consumer, were quoted $ 10 over international spot prices.

Prices in Japan were at a discount of 50 cents to $ 1, said a Tokyo-based trader.