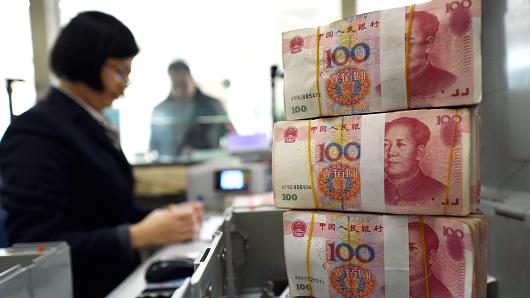 BEIJING : The decline in China’s foreign reserves is good news in the long-run, central bank advisor Fan Gang told Bloomberg News on Monday, describing the yuan as being at a “turning point” after possibly being overvalued in recent years.

Fang said in an interview that the government’s moves to restrict capital outflows, which have fuelled a depreciation in the yuan, is to prevent rapid fluctuations in reserves, which hit near six-year lows in December.

“The yuan was maybe overvalued for the last three or four years … it’s come to a turning point. This should be corrected,” Fan said. “We have been talking about the inefficiency of $ 4 trillion in foreign reserves and the ridiculousness of a developing country financing a developed country,” Fan added.

The government does not like to see fast changes in the country’s foreign reserves, Fan said, and while China will not totally drop capital control measures, it is unlikely they will step them up.

China’s reserves shrank by $ 41 billion to $ 3.011 trillion in December, posting the sixth straight month of declines, data showed on Saturday, after a week in which Beijing moved aggressively to punish those betting against the currency and make it harder to get money out of the country.

The inclusion of the yuan in the SDR basket made the yuan an international currency, which means China needs to hold less foreign reserves for the purpose of international credit, Fan said. Last year, the yuan depreciated 6.6 percent against the surging dollar, its biggest one-year loss since 1994, and it is expected to weaken further this year if the dollar’s rally lasts.

China’s monetary authorities, however, orchestrated a spike in yuan borrowing rates in offshore markets last week to stop speculators outside the country making a one-way bet on a fall in the Chinese currency.

Yu Yongding, a former advisor to the People’s Bank of China was quoted in media reports on Monday saying that China cannot let its yuan currency depreciate more than 25 percent against the dollar in 2017. Media reports did not specify what year Yu was using as a baseline comparison.

“If the yuan depreciates too much, China can step up capital controls, we have a large amount of foreign exchange reserves, and ultimately, we have a bottom line, we cannot allow the yuan to depreciate more than 25 percent,” Yu, a former member of the central bank’s Monetary Policy Committee, said, according to a transcript posted on Chinese news portal Hexun. “We should not be afraid of depreciation, I believe the scale of the depreciation is not limitless, we can completely control it,” Yu said.

China will continue to face pressures from capital outflows and currency depreciation in 2017, Yu added.