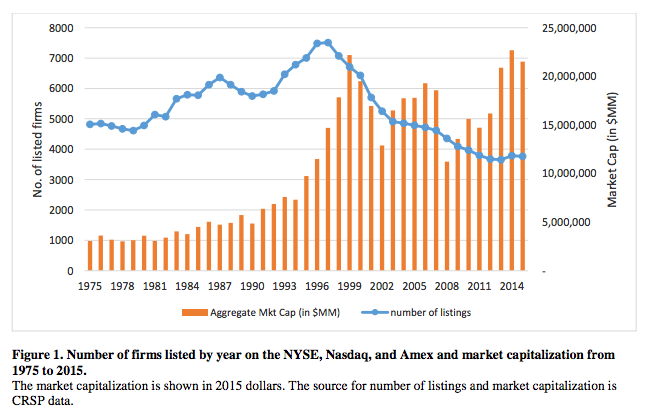 Apple, and other large public companies like it, may be an endangered species. Or at least their ownership structure might be. Indeed, some economists are starting to imagine a future where even the most valuable companies in America, like Apple, say so long to public markets.

That’s the subject of a National Bureau of Economic Research working paper published by this week by well-known economists Kathleen Kahle of the University of Arizona and Rene M. Stulz of the Ohio State University.

As you can see from the above chart, the absolute number of public corporations has been on the decline for decades, while the total market capitalization of those left remain near all-time highs.

But what the economists in the study found is that it’s not just that there is more wealth concentrated in the remaining public companies. More importantly, the wealth among public companies is concentrated as well. “In 2015, 35 corporations account for half the assets of public corporations and 30 account for half the net income,” the authors write. “In contrast, in 1975, these numbers were 94 and 109.”

Another striking change: In 1980, institutional ownership of public firms averaged 17.7%. Today it’s over 50%. Lastly, public firms are aging rapidly, with the average age rising from 12.2 years in 1995 to 18.5 years today. This reflects the increasing unwillingness of new firms to go public, and this trend has very important effects on the overall nature of public firms. For one, older firms are less innovative than newer firms.

Why does this all matter?

Back in May, Fortune published an investigation of just why newer companies are eschewing going public concluding that because the modern economy is less capital intensive, and because capital is so easily available today, companies feel no need to put up with the extra regulation and scrutiny that come with being publicly listed. The argument was also floated that this might not be an entirely bad thing, as “One of the enduring drawbacks of public ownership is the so-called agency problem, the misalignment of owners and managers.” According to this theory, “Top executives at big public companies typically own only tiny stakes and are tempted to enrich themselves in all manner of ways that may harm the other shareholders, whose ownership is often so diffuse that they can’t discipline the managers. That problem doesn’t arise in private firms, where the majority owners are usually either the managers themselves or members of a powerful board of directors.”

But this theory has a big problem. And it is one that anyone following the behavior of public companies in the past few years should know: Buybacks. Public firms have been increasingly giving earnings back to shareholders. Since 1975, the weighted average of total payouts—in the form of both dividends and share buybacks—has risen from 27.1% of income to 47% today. If public corporate executives weren’t following the best interest of shareholders, they’d likely be using this money to invest in perks or pet projects, not returning it to their bosses.

All of this points to a loss of the sense of purpose of being a public company in the modern economy. “As a whole, public firms appear to lack ambition, proper incentives, or opportunities. They are returning capital to investors and hoarding cash rather than raising funds to invest more,” Kahle and Stulz write.

Public corporate America is shrinking, and that’s not just a problem for business leaders, but one for all of us who think that the economy benefits from the transparency and access to opportunity that robust public markets create. And that goes not just for investors but for investors but for workers and for voters, as well. A more private economy creates more inequality and inequity, not just in public markets, and financial markets, but outside of them as well.