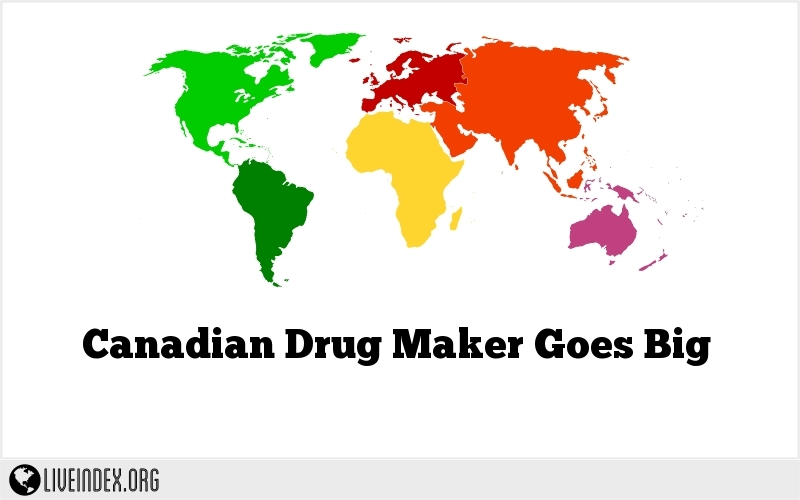 The reasons behind this growth are no secret: the world’s population is getting older and more sedentary. But it’s also growing. Consider the following facts from the PwC report:

An aging and less active populace will result in rising incidence of conditions like heart disease, diabetes and cancer.

These trends also hold true in the U.S., where total health care spending is expected to hit $ 4.4 trillion by 2018, up from $ 2.6 trillion in 2010, according to the Centers for Disease Control and Prevention.

Drug makers are obvious beneficiaries of that spending. And when you add the Affordable Care Act (Obamacare) to the mix, you get a “prescription for profits,” says Investing Daily editorial director John Persinos.

“It’s not our job to weigh the alleged virtues or evils of the president’s health reform law,” he wrote in the latest issue of our Personal Finance advisory.

One company that aims to take advantage is Valeant Pharmaceuticals International (NYSE: VRX). The stock has surged 56% since we recommended it in Personal Finance on July 24, 2013, well ahead of the S&P 500’s 10% gain.

Valeant is a multina­tional firm that develops, manufactures and markets a broad range of products, primarily in dermatology, neurology and branded generic drugs. Developed markets supplied 74% of its revenue in 2013, while emerging markets chipped in the remaining 26%.

The company took its current form in 2010, after U.S.-based Valeant merged with Canada’s Biovail. It relies heavily on acquisitions for growth—in the past six years, it has made over 60 deals—with a number of those coming in dermatology.

Its latest move came in February, when it announced that it is buying PreCision Dermatology—a maker of treatments for conditions like acne and atopic dermatitis (a type of eczema)—for $ 475 million, plus an additional $ 25 million if PreCision achieves certain sales milestones. PreCision is forecast to generate $ 130 million of revenue in 2014; Valeant expects to close the deal in the first half of the year.

Less than two weeks earlier, Valeant completed its $ 250-million purchase of Solta Medical, whose products include devices for tightening skin and preventing signs of aging.

The dermatology market has bright prospects. According to an August 2013 report from investment bank Harris Williams & Co., it’s on track to post a 5.3% compound annual growth rate between 2009 and 2017, by which time it will be a $ 13.1-billion business.

Factors driving that growth include rising occurrence of skin cancer and the aging population: right now, 42% of dermatology patients are 60 years of age or older, and 68% are over 40.

Moreover, Harris Williams says demand for cosmetic dermatology, which had taken a hit during the recession, is back on the rise, thanks to the both the aging population and the recovering economy.

Focused on the Eye Care Market

Valeant has also been focusing its deal-making on the eye care market. According to the American Academy of Ophthalmology, three-quarters of eye diseases are age-related, and one out of every five Americans—approximately 72 million people—will be 65 years or older by 2030, roughly double the number in 2000.

Numbers like that prompted the company to pull the trigger on its largest acquisition yet: Bausch + Lomb, a leading U.S.-based, privately held eye care firm. The $ 8.7-billion deal closed in August 2013.

Bausch + Lomb makes a range of products, from contact lenses to surgical tools and pharmaceuticals, including allergy-relief treatments. As is typical with Valeant acquisitions, significant cost savings are expected. In the case of Bausch + Lomb, management estimates $ 1 billion-plus over two years.

Management will also keep its foot on the gas on the acquisitions front, setting its sights on becoming one of the top five global drug makers by the end of 2016. The company feels that would require a tripling of its current market cap (or the total value of all its outstanding shares), to $ 150 billion.

“The objective may be aggressive and the strategy inherently risky,” wrote Personal Finance chief investment strategist Philip Springer in a February 21 article. “But the company has an excellent track record of growing by making good acquisitions in niche therapeutic areas or geographic regions that quickly boost profits.”

In the current issue of Personal Finance, John Persinos gives you his latest buy-sell advice on Valeant and reveals the names of two other pharmaceutical stocks poised to deliver big gains as drug demand soars.

You can get your hands on this just-released issue—which includes this eye-opening article—now when you take a no-risk, no-obligation trial to Personal Finance. Simply click here to start yours right away.

We encourage you to engage with our analysts and your fellow subscribers on our website. To ask a question or post a comment related to a particular article, please do so in the Stock Talk field at the bottom of that article.

Or to ask a general question, please go to the main Stock Talk page found under the Resources menu for each publication.