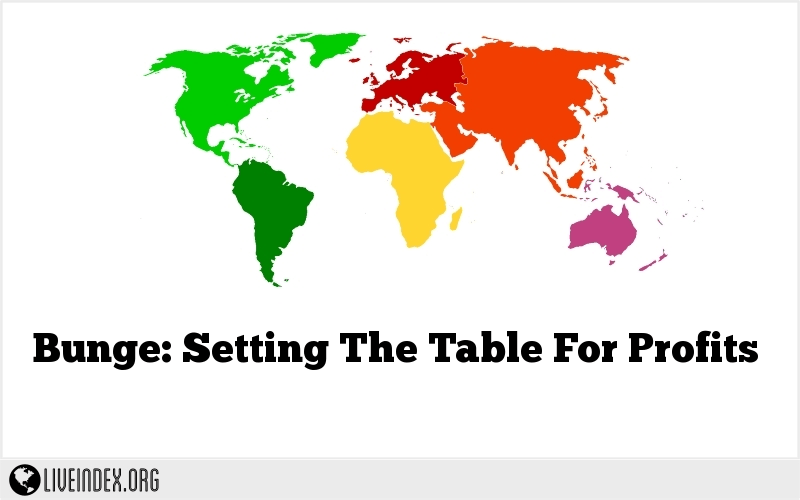 Bunge: Setting The Table For Profits

One way to make winning stock picks is to look for trends that can put wind in the sails of companies poised to benefit, then zero in on the ones that are best positioned for gains.

For example, one of today’s most reliable long-term trends is rising global food demand, driven in large part by the world’s ballooning population.

Right now, the Earth’s population is around 7.2 billion, and the United Nations forecasts that will jump to 9.6 billion by 2050. Most of that growth will take place in developing countries: the UN sees their combined population rising to 8.2 billion in 2050 from 5.9 billion today.

At the same time, spreading wealth in the developing world is making citizens there hungrier for a more Western diet—in other words, more meat. That translates into rising crop consumption, because it takes 10 pounds of corn and grain to produce one pound of beef.

“Meanwhile, the amount of arable land is on the decline,” wrote Investing Daily analyst Benjamin Shepherd in a February 2012 article. “According to UN data, there was half an acre of arable land available for every person on Earth in 1964. But due to development, pollution, population growth and a variety of other factors, that figure had dropped to 0.2 acres per capita by 2008.”

Rising demand and a lack of new farmland should keep prices “above historical averages over the medium term for both crops and livestock,” according to a 2013 report from the Organization for Economic Co-operation and Development (OECD).

To take advantage, farmers will have to squeeze more out of their land—putting companies that can help them do that in position to benefit.

Connecting Farmers to a Hungry Planet

All of this is great news for Bunge (NYSE: BG), a holding of our Personal Finance advisory’s Growth Portfolio. The New York-based firm focuses on helping farmers produce larger harvests by providing a smooth connection between them and customers.

The company’s agribusiness segment (which supplied 74% of its 2013 revenue) transports, stores and processes agricultural commodities, such as grains and soybeans. It also processes raw soybeans and rapeseed into oils and meal for use in animal feed.

Bunge’s other divisions include edible oils (15% of sales), which produces margarine and other products for the foodservice industry; sugar and bioenergy (7%), with eight mills in Brazil that produce sugar and ethanol, as well as a London-based sugar trading and marketing arm; milling products (3%), including milled wheat, corn and rice; and fertilizer (1%).

The company gets about three-quarters of its revenue from outside the U.S., with its greatest growth opportunities in South America and Asia; it has doubled its combined revenue from these two regions since 2004.

We first recommended the stock in Personal Finance in May 2006. Since then, it has gained 42.2% (including dividends). Investing Daily managing editor John Persinos feels 2014 could be a big year for Bunge:

“Bunge enjoyed a prosperous 2013 and should continue to thrive in the coming year, as farmers in emerging markets clamor for ever-greater amounts of fertilizer and seed,” he wrote in a February 7 Personal Financearticle.

That positive sentiment was echoed by the company’s CEO, Soren Shroder, who told analysts in a post-earnings conference call last week that the agribusiness operation could rack up record profits this year, thanks in part to forecasts of a strong soybean crop in South America.

“I think the overall soybean crop will be—definitely a record one,” he said in a transcript posted on SeekingAlpha. “The northwestern part of Brazil is probably better than people expect and there are some parts of the south that are a little bit worse. But on average, the soybean crop in total looks to be really just an excellent one.”

The company’s sugar business in Brazil continues to be a drag on its earnings due to poor weather and lower global sugar prices. Overall revenue declined 3.9%, to $ 16.38 billion, but beat the consensus estimate of $ 16.15 billion.

Bunge is currently in the process of a strategic review of its sugar-milling operations in Brazil, recommendations of which could include a sale.

This business’s book value is between $ 2.0 billion and $ 2.5 billion, CFO Drew Burke said on the conference call. If it does sell these operations, Bunge may invest the funds in its core operations or return them to investors through share buybacks or dividend hikes, depending on which option management feels will deliver better shareholder returns.

In all, Bunge expects to spend $ 900 million on capital expenditures this year, down slightly from $ 1 billion in 2013. According to Shroder, priorities include adding infrastructure in Western Canada, which saw a record canola crop last fall, as well as Australia and northern Brazil.

The company prefers to grow by acquisitions, Shroder says, because “it helps maintain balance in industry supply and demand and immediately provides cash flow.”

Bunge also has a long history of share buybacks. This year, it plans to repurchase $ 200 million worth of its own stock and has approximately $ 500 million available under its current authorization. Its annual dividend rate of $ 1.20 yields a low 1.5%, but it has hiked the payout every year since its IPO in 2001.

Get full details on Bunge and dozens of other stocks poised to cash in on society’s most reliable megatrends when you take a no-risk trial to Personal Finance. Don’t miss out. Start yours now!

We encourage you to engage with our analysts and your fellow subscribers on our website. To ask a question or post a comment related to a particular article, please do so in the Stock Talk field at the bottom of that article.

Or to ask a general question, please go to the main Stock Talk page found under the Resources menu for each publication.