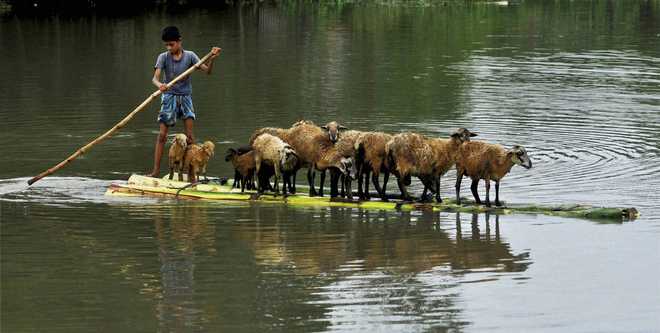 India : Over one million people hit as floods worsen in tea region of Assam

NEW DELHI : More than 1.2 million people in northeast India have been hit by floods which have submerged hundreds of villages, inundated large swathes of farmland and damaged roads, bridges and telecommunications services, local authorities said on Tuesday.

Incessant monsoon rains in the tea and oil-rich state of Assam have forced the burgeoning Brahmaputra river and its tributaries to burst their banks — affecting more than half of the region’s 32 districts.

“District authorities have opened 220 relief camps and 130 relief distribution centers that house a total of 88,133 inmates,” the Assam State Disaster Management Authority said in a statement.

The Brahmaputra, Assam’s main river which is fed by Himalayan snow melt and monsoon rain, has been overflowing in many areas along its course.

The disaster management authority said the floods had affected 18 districts.

More than 2,100 low-lying villages and almost 100,000 hectares (247,105 acres) of crops have been partially or totally submerged in upper Assam, which includes the districts of Dhubri, Lakhimpur, Golaghat, Morigaon, Jorhat, Dhemaji, Barpeta and Dibrugarh.

The fast-flowing waters have also breached embankments and eroded dykes, leaving some parts of national and state highways inaccessible and compounding efforts to rescue marooned villagers and distribute food aid such as rice, lentils and oil.

India usually experiences monsoon rains from June to September, which are vital for its agriculture.

But in states like mountainous Assam, the rains frequently cause landslides and flooding that devastate crops, destroy homes and expose people to diseases such as diarrhea.

Experts say decades of mass deforestation have led to soil erosion where sediment is washed downstream from mountainous areas. It ends up in rivers where it builds up on the river bed, raising the level of the water far higher than normal.

Local people also say corrupt officials have siphoned off some funds meant for flood risk reduction projects and resulted in shoddy construction of embankments which are often breached.