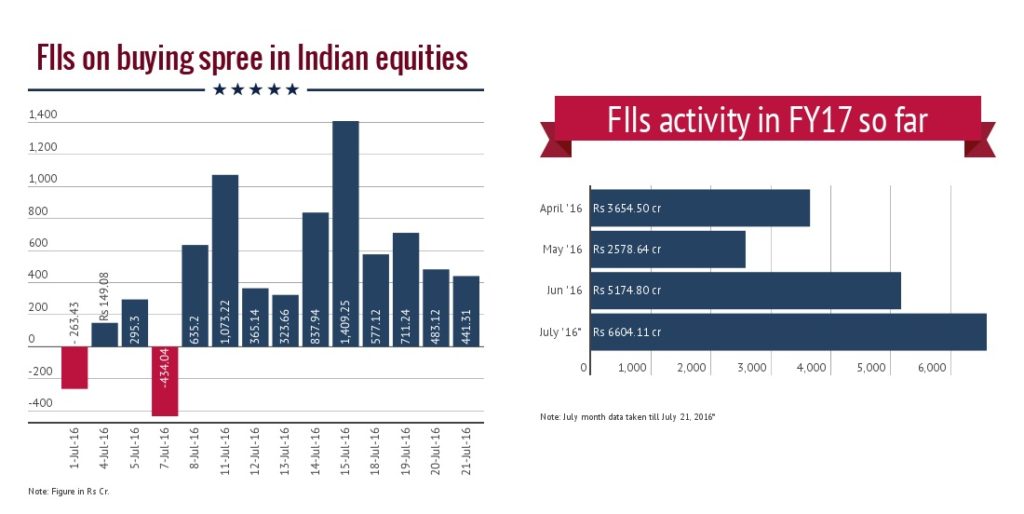 Unabated foreign fund flows kept the rally going in Indian equities on Monday even as experts fretted about expensive valuations and tepid corporate earnings growth.Kotak AMC’s Nilesh Shah said the market was not cheap any longer and could struggle near term despite the longer term triggers working out well.

“We are seeing liquidity being pumped into the economy, interest rates being cut at the borrower level, good monsoon and the bottoming out of exports,” he told CNBC-TV18.

“So, if you take a 3-6 months view, probably it is going to be challenging. But, if you take a three-year view then certainly this is the market where you can still do a bottom-up stock picking,” he said.

According to a report in the Business Standard newspaper, aggregate June quarter net sales of 162 companies those have declared earnings have risen only 0.5 percent year-on-year, compared to a 3.8 percent growth in the March quarter.

“The valuation is basically pricing in a fair bit of optimism and the optimism stems from multiple parts,” Kumar said, referring to policy measures, monsoon and economy recovery.

“Now, all these are priced to perfection in a way that the margin of safety is clearly much more diminished in the environment that we are in,” he said.

But the driving force for now is clearly liquidity—specifically foreign capital flows–and that is making a mockery of fundamentals. Foreign funds have net bought close to USD 1 billion of Indian equities so far in July alone.

Sandeep Shenoy of Pioneer Investcorp says despite the near month long rally, prices are still not in an “irrational zone” and that sustained liquidity flows could lift prices even higher.

His feels players who are already invested should ride their profits for some more time, but those looking to buy afresh should wait for a correction.