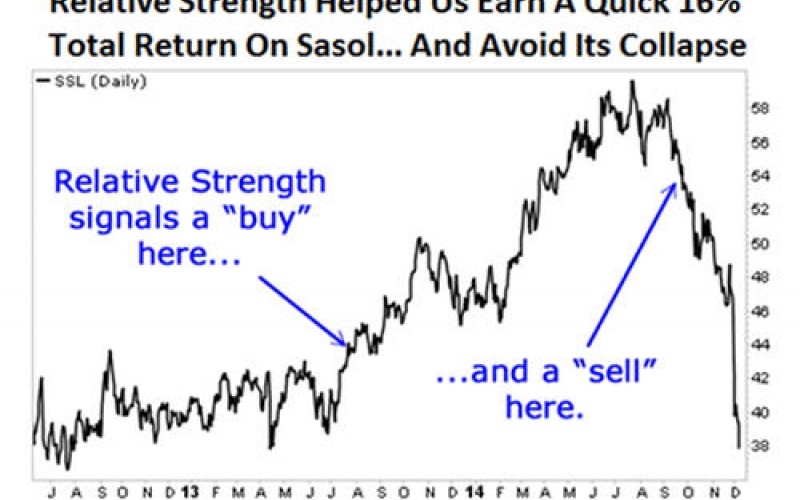 How To Beat The Market By Completely Ignoring It

These days, investors are bombarded with a lot of chatter from the market.

The internet, TV and radio are flooded with so-called “experts” claiming to know the future of the economy and offering varying opinions on where investors should place their hard earned dollars.

On any given day, you might come across a dozen articles online claiming the market is in-store for a major bull run, only to see a news report claiming the next recession is just around the corner, not even an hour later.

With the market presenting you such a mixed bag of opinions, how are you to know what investments you can actually trust?

The market — and its thousands of pundits — often panders to what I think is an investor’s absolute worst enemy: their emotions.

Whether its fear, optimism, excitement or panic, many investors have a way of letting their emotions completely cloud their judgments. And often times, that can cost them a big gain or lead them to some hefty losses.

The truth is ignoring the market allows to you completely take the emotion out of investing. And by doing so, you are able to make much more rational decisions on how to position your portfolio.

Just think back to 2008: the financial crisis was in full-swing, the market was down 43.4% and overly optimistic investors were taking huge hits waiting for a potential rebound that would take months to come to fruition. And even when the upside arrived, investors had to wait five years to get back to even.

Yet rational investors who focused on the numbers rather than on what the “experts” were anticipating would have cut their ties with the market five months before it hit its bottom — completely sidestepping what surely would have been crippling losses.

And those same rational investors could have noticed the market’s rebound just four days in and set themselves up to prosper from what has been an epic five-year bull run.

So you might be wondering, “How do I do it? How do I take the emotion out of investing?”

The answer is an investment system we, at StreetAuthority call the Maximum Profit system. And it solves one of the most common problems every investor faces — how to get bigger gains in a shorter amount of time.

It does so by focusing on two distinct characteristics that every stock possesses. These indicators signal when a stock is about to enter a “growth window,” alerting you that now is the optimal time to buy — as well as when that window is shutting, letting you know when to sell.

So how does it work? Well as I said, Maximum Profit uses two unique indicators.

They aren’t widely-known. You won’t find them on any balance sheets, income statements or SEC filings. Yet when you combine them, they can help you get in on a stock’s upward trend, earn bigger gains in half the time and avoid substantial losses.

The first indicator is relative strength. (This is a tool often used in what is otherwise known as momentum investing.)

Simply put, relative strength tells us how fast a company’s share price is moving upward by comparing the past six month’s performance of a stock to the entire market.

Stocks outperforming 70% of the market are considered “strong” relative to their peers. And studies have consistently shown over the years that stocks that are currently performing well are likely to continue doing so in the future.

Take Sasol (NYSE: SSL) for example. My system flagged it on September 13, 2013, right as it was beginning to show an uptrend. As expected, it quickly jumped higher. Then, after about a year, Sasol’s run came to an end. This caused its relative strength to drop, signaling a sell. 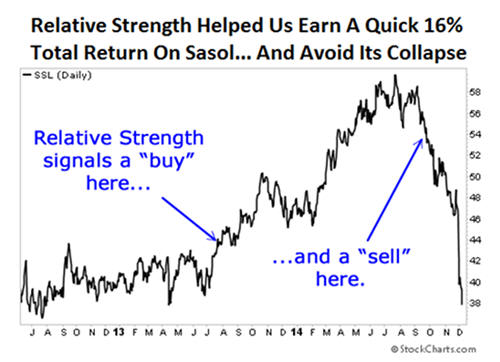 Now this is just one isolated example of how RS can tell you when to buy and sell. But I’ve seen it work many, many times with my system. And there have been hundreds of academic studies performed on relative strength to prove its effectiveness. One in particular found that stocks with relative strength — essentially those in an uptrend — produced compound annual returns of 15.2%. Meanwhile, stocks with no relative strength returned just 4.5% per year.

You see, there’s no need to watch the latest news report or read dozens of in-depth analysis on where the stock market is headed. Using proven indicators like relative strength helps us take the emotion out of investing to earn some truly outsized gains.