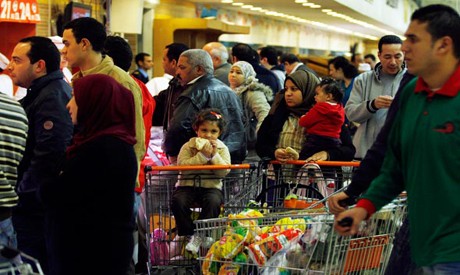 Food demand normally surges during the Muslim holy month because of heavy consumption following the dawn-to-dusk fasting period. Ramadan this year began on June 6 and ended on July 5.

Urban consumer inflation accelerated to 14% in June from 12.3% in May, the statistics agency said.

Core inflation, which excludes items such as fruit and vegetables as their prices fluctuate widely, also rose to 12.37% year-on-year in June, up from 12.23% in May, the central bank said on Sunday.

The import-dependent country of 90 million has been under pressure since a 2011 uprising drove away tourists and foreign investors, straining its foreign reserves which halved to $ 17.5 billion in June.

The central bank plans to raise reserves to $ 25 billion by year-end.

Economists say the pound is still over-valued and expect another devaluation in 2016/17, a move that could further stoke inflation.

President Abdel Fattah al-Sisi is under increasing pressure to revive the economy and keep prices under control to avoid any backlash from the public whose protest demands in the 2011 revolution included “bread, freedom and social justice.”

The government said late last year it would control the prices of 10 essential commodities to help restrain inflation. Price movement subsequently eased but surged back again after the March devaluation.