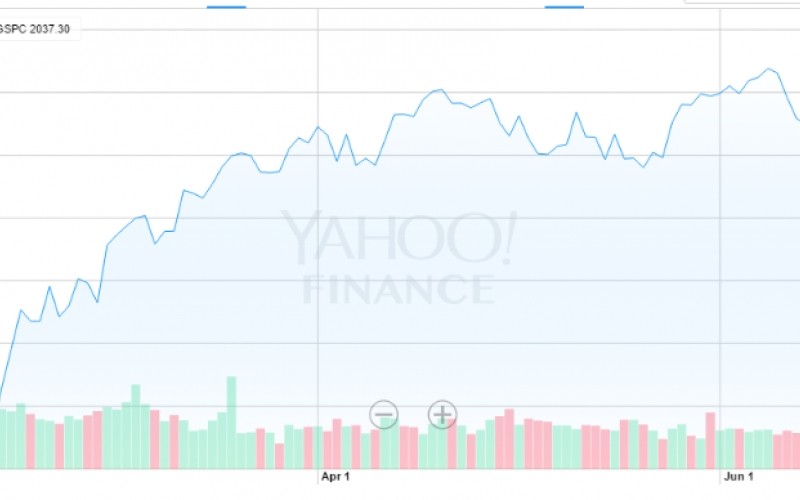 What Does Brexit Mean for Individual Investors?

This week Americans are asking: What does Brexit mean for individual investors? The answer is: not much.

If you follow financial news, you’ve undoubtedly heard the term Brexit for the past several months. If you’re like the average American, this word was introduced to you for the first time on Friday morning.

As my wife and I were winding down for the evening on Thursday, my Twitter feed reminded me that the voting was underway in Great Britain. It occurred to me that I had never heard any mention of Brexit outside of Bloomberg, finance blogs and my Twitter feed.

To validate my theory that the general American population didn’t care about the possibility of Britain exiting the European Union, I asked my wife if she knew what Brexit was. Her confused reaction confirmed my hypothesis.

That all changed within 15 seconds of turning on Good Morning America the next day. Since waking up on Friday, Americans have been bombarded with the news that the Brits voted to leave the EU and that the stock market took a beating for it.

Americans are notorious for knowing very little about other countries’ affairs. Unless we majored in political science with an emphasis in European economics, we have no idea what the consequences of this referendum have on the world.

What does Brexit mean for individual investors like me?

We only care about how it affects us directly. We ask, what does Brexit mean for individual investors like me?

The two most common questions being asked by individual investors are:

With the S&P 500 dropping over 3.5% on Friday, these appear to be reasonable questions. Stocks are either providing a great buying opportunity or are at the beginning of a free-fall…right?

Not necessarily. Let’s let the facts put some perspective on the situation.

Is now a good time to buy?

Is the stock market going to crash?

The second question – is the stock market going to crash? – isn’t as easy to determine. Market crashes – or any market movement for that matter – are impossible to predict.

What we can do is look at how the market has responded in similar situations.

Ben Carlson, author of “A Wealth of Common Sense,” recently tweeted the following info graphic showing the performance of the S&P 500 after major geopolitical events. 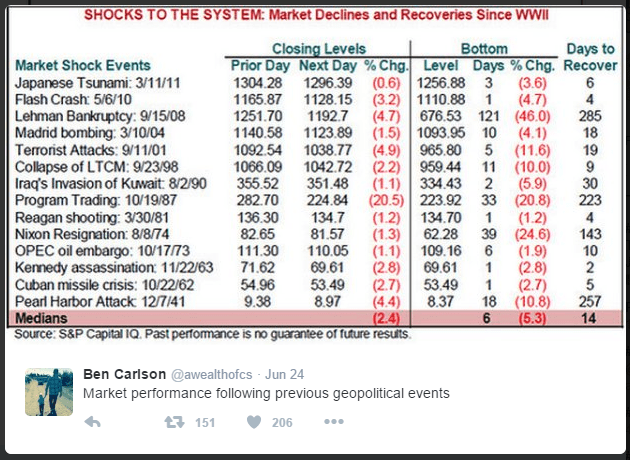 The graphic shows how much the market fell on the days succeeding each event and how long it took before getting back to a break even point. Everything from the attack on Pearl Harbor to the relatively recent tsunami in Japan is documented.

What’s clear is that the market does not like uncertainty. Each of the featured events represent moments of global uncertainty.

As these events were unfolding, people had no idea how their lives would be affected or what the political ramifications would be. People were scared and stocks went down.

It’s important to note that the market recovered every time. Sometimes much quicker than others, but it recovered nonetheless.

Of the 14 events shown, only four took longer than 30 days to get back to a break even point. The median recovery time was only two weeks.

Let’s look at each of the four long-recovery events individually and decide whether there are any similarities with Brexit.

So, what does Brexit mean for individual investors? In the long run, not much.

While it’s hard to say what the long-term repercussions of Brexit will be on American investors, it’s safe to say the situation is not as severe as the four events discussed above.

Even if a quick recovery does not ensue, the recovery period after the Lehman bankruptcy was only285 days. That’s less than 10 months.

Ten months can seem like a lifetime for panicked investors with no perspective, but it’s just a blip in time for patient, experienced investors.

If there is a stock market crash in the near future, the likelihood is that Brexit will not be the sole cause of the collapse.

Mitchell Mauer is the Founder of TheStockMarketBlueprint.com. The Stock Market Blueprint is a free site that finds value stocks for investors building long-term wealth. The site’s investment philosophy is anchored in principles established by Benjamin Graham and his most reputable followers over the last 100 years.