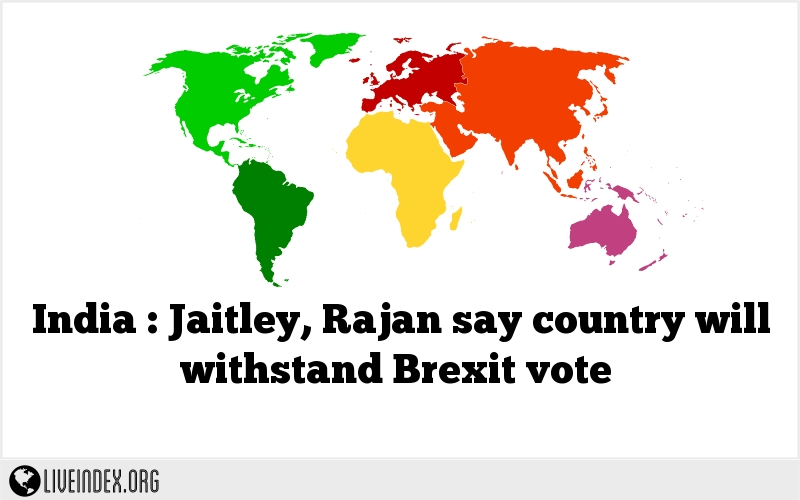 Both also said India was well prepared to deal with any volatility, with Rajan pledging to inject liquidity in dollars and rupees as needed.

The comments sought to reassure investors after the NSE Nifty fell as much as 4.2 percent and the rupee slumped to a nearly four-month low after the Brexit vote.

“Our macro-economic fundamentals are sound with a very comfortable external position, a rock-solid commitment to fiscal discipline, and declining inflation,” Finance Minister Arun Jaitley said in a statement.

“At the same time, for the medium-term, we will steadfastly pursue our ambitious reform agenda — including early passage of the GST (goods service tax) that will help us realize our medium term growth potential of 8-9 percent.”

RBI chief Raghuram Rajan, in TV interviews and in a release of his own, predicted India would not see any major foreign selling given its relatively better fundamentals relative to other economies.

The RBI intervened heavily in morning trade after the rupee fell as much as 68.22 to the dollar, its lowest since March 1 and not far from a record low of 68.85 hit on August 2013 when India was in the midst of its worst currency crisis in more than two decades.

Before the Brexit vote India had been seen as one of the sturdier emerging markets, with the RBI having accumulated a record $ 363.2 billion in foreign exchange reserves earlier this month.

Analysts are also hopeful of economic reforms from the government, including potentially a revamped national goods and services tax.

“Rupee should be around present levels and worst case, may go to previous lifelow but RBI should be able to control it.”

The Nifty was last down 3.7 percent, with companies heavily exposed to Britain markets among the leading decliners. Tata Motors was down 11.6 percent.

But bond markets were relatively sturdier, as investors moved towards safe-havens. The benchmark 10-year bond was down 1 basis point at 7.47 percent.