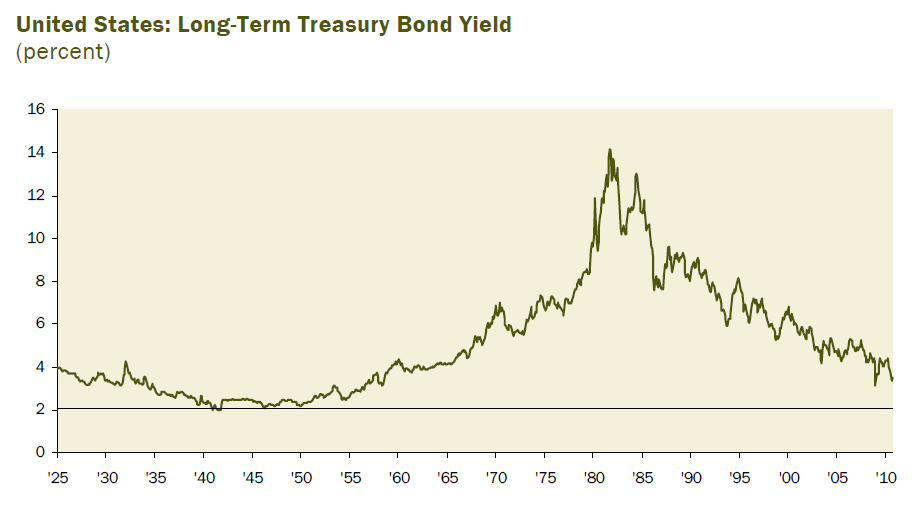 As income-oriented investors continue to scramble to find decent yields, many are being enticed towards long-term bonds.

Don’t be one of them.

While the yields are tempting enough, they’re still not very attractive – and in the current market conditions, it’s a value trap that’s bound to bring losses in the long run.

As a source of income, they’re all risk and very little reward.

You see, bonds denominated in a fiat currency are a massive one-way bet against the investor.

When the monetary system was tied to gold, long-term bonds were a good option. Investors knew exactly what they were getting – a fixed stream of returns over a long period of time and a return of principal at the end.

Of course, prices could move up or down during the term of the bond, but since money was tied to gold, investors had no reason to expect severe movement in either direction.

In this environment, bonds were a good deal, and income investors could rely on them to fund their retirements.

But all that changed when the U.S. went off the Gold Standard in 1933…

The True Value of Money

Once bonds were linked to paper currency, governments were tempted to inflate their currencies, thereby reducing their debts.

For example, Franklin D. Roosevelt invalidated gold clauses in 1933 at the same time he raised the price of gold from $ 20.71 to $ 35. Bondholders with provisions that said they were to be paid in gold were instead repaid in devalued dollars.

So with the value of money being controlled by the government, long-term bondholders have a one-way bet against them.

The government can increase its deficits, providing goods and services without paying for them, and finance the increase by allowing inflation.

And over a 30-year bond term, you have no way of knowing how far the government will take this.

For example, investors who bought 30-year bonds at 5% in the 1960s, believing there was some allowance for inflation built in, saw the value of their principal decline by 75% over the life of the bond, wiping out the real value of their interest income.

Of course, at some point, people will grow tired of seeing their savings decimated and will speak out. As this becomes an important issue politically, the government will act to reverse the inflation.

By and large, bondholders, which include savers and pension funds, have less political power than borrowers, and are on the opposite side of the table from the government.

Economically, double-digit inflation can cause a lot of damage. So there’s no doubt that if inflation gets into the double digits, the government will move to rein it in, just as it did in the 1980s.

That means there’s a level of interest payment at which you should buy long-term bonds.

Today, with inflation around 2% (and the Fed target also at 2%), you might feel that a real interest rate of 3%, plus 2% inflation, plus a modest cushion for the risk that inflation zooms to 10% would be an appropriate risk-free yield for a long-term U.S. dollar bond.

That would give you an appropriate yield of about 6%.

That 3.61% difference between what you should accept and what you actually get is a measure of how big a rip-off long-term bonds are.

The value of a 2.39% 30-year bond in a 6% interest rate environment is 49.8% of par. In other words, the government is giving you less than half of what you should receive.

In practice, you’re unlikely to hold a 2.39% 30-year Treasury until 2046. With yields so low, barely above the level of inflation, if you sell before 2046, you’ll receive only a fraction of its nominal value. For example, if Treasury yields rise to 4% two years from now, you’d receive 72% of what you paid.

Conversely, with yields dropping further, there’s a very small chance for profit over any but the shortest run. That’s because the Fed would have to put short-term rates into negative territory. And as the Fed is discovering in Japan and Switzerland, that’s difficult to do when banks and investors start hoarding cash.

The bottom line is that in these markets, it’s hard to get a decent yield from an investment without taking on excessive risk.

But a five-year bond yielding 1.09% is a much better deal than a 30-year bond yielding 2.39%. For one, it carries much less principal risk and by 2021, maybe sanity will have returned to the money markets and you’ll be able to reinvest at a proper rate.