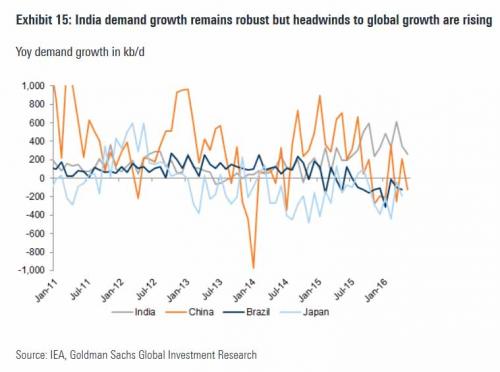 Why Goldman Is No Longer Buying The Oil Bounce

One month ago there was some confusion when Goldman released a report in which it cut its 2017 oil price forecast due to expectations of slower market rebalancing, while at the same time boosting it near-term crude price projections due to short-term supply disruptions. To be sure, the media – and the market – focused only on the latter part while ignoring the former, which was far more important for global supply and demand trends.

Perhaps to address this confusion, Goldman’s Damien Courvalin released another report overnight, titled “a fragile recovery” in which he explained why he is not “buying” the oil rally and why with supply disruptions likely soon to be resolved, it is time to focus on the big picture, one which Goldman does not find particularly optimistic. To wit:

Goldman leads off with the catalyst that made a spash one month ago, namely the unprecedented – and rather surprising  – surge in oil production disruptions: “Last month, we brought forward by one quarter and to 2Q16 our expectation for the end of the global oil surplus given the large rise in production disruptions. These disruptions have become even larger since and are setting new multi-year highs.”

Among the key disruptions: Canada and Nigeria, both of which proved to be worse than expected: 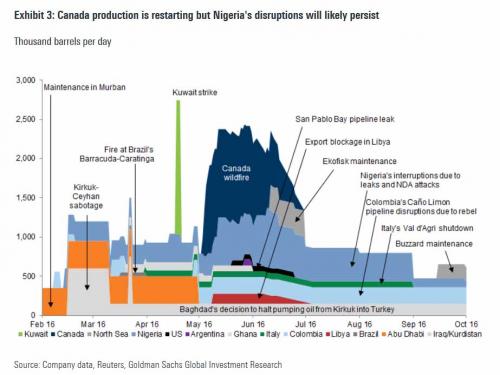 Goldman also notes the disrupted production in Venezuela “although official and third party data point to only slight declines of 85 kb/d year-to-date through May.” This may change if and when the Maduro regime is overthrown but for now the status quo remains: “A further deterioration in the country’s finances or political instability present risks of larger production declines than we assume which would be a catalyst for higher prices.”

What is more important to Goldman is that while the widely documented disruptions have pushed short-dated prices higher,  “we believe that the market is not yet in a deficit as we continue to see upside surprises to production elsewhere.”

Aside from OPEC, Goldman believes that $ 50 is where US shale production will start stepping in.

Prices are now above what most non-OPEC producers had budgeted for the year. This is particularly the case in Canada where producers had budgeted for $ 35/bbl oil prices this year, leaving risks to our flat yoy 2H16 production forecast as skewed to the upside. And while we don’t expect current prices to drive a sharp rebound in activity globally, we are seeing signs that the recovery in prices already helps. The international oil rig count was up 9 rigs in May vs. April, the first overall rig count increase since Sep-15, and despite the fall in the Venezuela rig count. For example in China, while production declines have been large this year with May output down below 4.0 mb/d, there has also been a large increase in the rig count which suggests that output could stabilize later this year.

We further believe that at current prices, we can see a pick up in brownfield investment, consistent with our conversations with producers looking to maximize cash flow while limiting incremental spending. Importantly, this is a short-cycle investment which can drive large production rebounds, as was the case in 2009.

But most concering to oil bulls is what Goldman has to say about demand, which incidentally, is something we have said all along: it is not global demand that is pushing prices higher, as much as a dramatic ramp up in one-time Chinese credit-fueled imports:

Chinese implied demand grew by 2.0 % in April, however, weak May industrial activity raises concerns over the effectiveness of the recent stimulus in supporting activity with industrial activity up sequentially but fixed investment decelerating significantly. Implied oil demand for May is down sharply by 1.2% yoy although we expect actual demand to likely point to modest demand growth once inventory data is available. Admittedly, the measurement of Chinese demand is made difficult by the uncertainty over refinery runs, which may leave as SPR builds what is in fact a rise in teapot refinery runs and ultimately stronger demand growth (but stronger product exports as well).

Which brings us to Goldman’s far less optimistic conclusion than what the market made of the firm’s analysis one month ago:

On aggregate, we view the price recovery as fragile. Absent further sharp rises in disruptions, the market is likely to remain close to balance in June as Canadian production restarts and production elsewhere remains resilient. As a result, we continue to expect that prices between $ 45/bbl and $ 50/bbl in coming months are still required to bring the market into a deficit in 2H16. While additional significant disruptions in Nigeria or Venezuela, for example, could bring prices sustainably above our 3-mo $ 49/bbl WTI forecast, a reversal in disruptions, weakness in demand growth, upside surprise from OPEC production or a recovery in non-OPEC maintenance drilling given higher prices all create risks that our 3Q16 deficit of -350 kb/d ends up a build in inventory, pushing prices lower. As of today, we view the odds of both sets of risks to our forecast as relatively balanced.

All of this means that whoever is funding the Niger Delta Avengers will have to spend much more cash to make sure that oil remains in the vicinity of $ 50 for the next few month, or else the relapse of the “summer of 2015” means that in about a month we may see a comparable move that the one observed last fall when oil proceeded to plunge and ultimately hit the lowest price in over a decade.