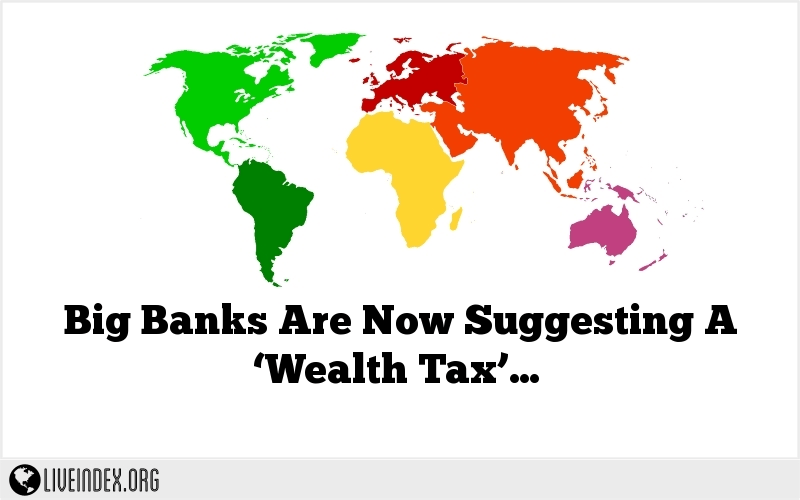 There is a two-word phrase which is virtually never heard within the vacuous propaganda machine known as the mainstream media: “wealth taxation”. There are very obvious reasons for such conceptual censorship.

To begin with, the corporate media is merely one of the subsidiaries of the financial crime syndicate which readers know as “the One Bank” . The One Bank exists for one purpose, to steal wealth. Any form of wealth-taxation would effectively claw back significant amounts of these ill-gotten gains; therefore, discussion of this concept is verboten.

This is why we have an “income taxation” system, the most inefficient, complex, and economically destructive form of taxation system which could be inflicted upon us. We have income taxation for one, and only one reason: it provides a taxation “free ride” for the Ultra Wealthy, the proprietors of the One Bank.

How, then, is it possible that Deutsche Bank, one of the Big Bank tentacles of the One Bank, could have recently and openly suggested implementing wealth taxation? It is both a putrid and delicious display of irony.

Our governments have already been bankrupted, and our public treasuries have been emptied (via the“bank bail-outs” of 2008). The masses have already been virtually squeezed-dry of their wealth. Our overallstandard of living has already plummeted by more than half. The Middle Class is virtually extinct , having devolved into the Working Poor. But the bankers’ masters are still hungry.

Thus, their psychopathic minions have been encouraged to dream up new-and-innovative ways to steal more. One form of systemic theft which has been gaining momentum is “the negative interest rate”: borrowers literally stealing from lenders (and savers). It is in this context that we see the two-word phrase which is a “four-letter word” to all bankers: wealth taxation.

…the ECB and BoJ should move more strongly toward penalizing savings via negative retail deposit rates or perhaps wealth taxes .

Here it is necessary to point out the extreme perversity which is implicit in this suggestion. Why is a Deutsche Bank mouthpiece suggesting “negative retail deposit rates or perhaps wealth taxes”? The answer is to (supposedly) stimulate our economies.

Do you “stimulate” an economy by raising taxes? No (but with a caveat). Thus any and every time we see a banker, or politician, or mainstream drone suggesting negative interest rates as a means of “stimulating our economies” they are lying. It is merely an utterly absurd pretext to supposedly justify more, naked stealing.

In fact, we already have a general, systemic “tax” inflicted upon everyone (except the Ultra Wealthy). It’s called inflation. Every time that corrupt central banks print up a new unit of their fiat currency funny-money, they create inflation. That is the (correct) definition of inflation.

Here we get more lies and perversity. The bankers, and central bankers in particular, lament that we don’t have enough inflation, because we supposedly need more inflation to “stimulate our economies”. Let’s put aside the first, obvious lie: the ludicrous/mythical “inflation rates” fabricated by our corrupt governments. Let’s deal, instead, with the second lie.

This brings us to the delicious aspect of Deutsche Bank’s ironic suggestion. Because the Big Bank’s foot soldiers are being encouraged to think of more ways to steal-via-taxation, it was only natural that one of those foot soldiers would eventually blurt out the taboo words “wealth taxation”. What makes this deliciously ironic is that unlike the tax of negative interest rates, and unlike the tax of inflation, wealth taxation would actually serve to stimulate our economies, if we used it to replace our destructive/inefficient income taxation system. How? Why?

Income taxation is selective taxation. Worse, as previously noted, it is a form of taxation which automatically under-taxes individuals at the top of the wealth totem-pole. This is a matter of simple arithmetic.

For a poor person (someone with little-to-no-wealth), their annual income is virtually equal to their total wealth. Thus, taxing income provides the maximum “bite” on the wealth of the poor. For the average billionaire, his income is (at most) no more than roughly 1% of his total wealth. Tax that income, even at 100%, and the billionaire hardly notices.

No. As a matter of elementary economics, what do we know about the wealth of the wealthy, and in particular, the Ultra Wealthy? They hoard it, almost all of it. Because the Oligarch Trillionaires have been allowed to steal most of the wealth from our societies, most of that wealth (our wealth) is now hoarded. It is idle, useless capital – in a capitalist system. We see how our economies are literally starving to death from lack of capital, via a U.S. chart which is familiar to regular readers.

More and more and more wealth is being sucked (illegally) into the hoards of the Ultra Wealthy, via their Big Bank crime syndicate. Less and less capital is circulating in our economies. How do we reverse theeconomic starvation of our economies? Tax that stolen wealth .

This must be restated, in order for the full monstrosity of this truth to be comprehended. In any average roomful of 1,000 Americans, the one Fat Cat would hold as much wealth as 900 of those people combined. That’s a lot of stolen wealth, as certainly the Fat Cat didn’t earn as much as the other 900 people.

Income taxation fully taxes the wealth of the bottom-90%. Income taxation doesn’t even touch the equal amount of wealth held by the Fat Cat. Introducing wealth taxation would thus double the size of the tax base. For the Fat Cat, this means paying a meaningful level of taxation, for the first time ever. For the bottom-90%, who would no longer shoulder the tax burden alone, it means lower taxes.

The genie has now been let out of the bottle.

The question is: are any of the bottom-90% even paying attention?