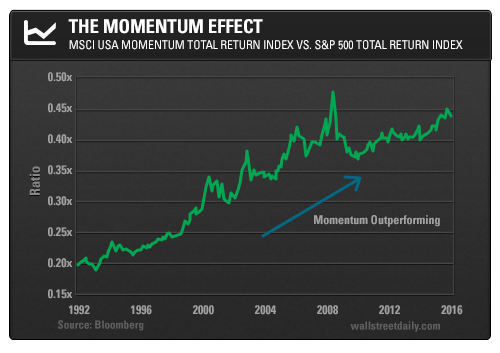 Should We Fear A Momentum Crash?

Imagine if you could simply buy the stocks that have performed the best over the past several months and outperform the S&P 500 going forward.

It seems too good (and simple) to be true.

However, momentum strategies have undeniably outperformed over time.

Stocks seemingly have mass and display inertia – like physical bodies.

To paraphrase Sir Isaac Newton, a stock in motion tends to stay in motion.

Indeed, the momentum effect is a curious stock market anomaly. You shouldn’t be able to divine future performance from past prices, but you apparently can.

Let’s take a closer look at the momentum anomaly and the problem it poses for the efficient market hypothesis (EMH).

The MSCI USA Momentum Index (the Index) includes securities with the highest momentum scores, based on 6- and 12-month risk-adjusted momentum values.

Below, I’ve plotted the index’s total return relative to that of the S&P 500.

When the line is rising, the stocks with the best upward momentum are outperforming, which has occurred rather consistently over the past 25 years.

Simply buying past winners and selling past losers has been a very profitable approach.

Of course, this outperformance may have already ended. But the long-term persistence suggests that there’s a behavioral cause. Perhaps a cognitive bias affecting the way we collectively trade and invest perpetuates this anomaly.

For example, the index performed admirably on a relative basis from June 2001 to September 2002 – during the latter stages of the tech bubble collapse.

The index even outperformed from August 2007 to July 2008 – the beginning of the credit crisis.

Then again, these results don’t seem all that surprising when you consider the outside forces at play.

A stock market peak is a process. Most stocks begin to fall before the S&P 500 reaches its apex, but some stocks continue to advance. Momentum strategies tend to do well at stock market tops because they stick with those stocks still trending higher.

In a bear market, low-beta (low market risk) stocks have a tendency to outperform high-beta stocks. If this shift is gradual, then the composition of the index will change in time and it can outperform by falling less than the S&P 500.

Naturally, given these desirable characteristics, smart beta funds have been popping up to satisfy investors’ thirst for momentum. Smart beta is a term for systematic investing based on factors such as dividends, size, value, volatility, earnings quality, and momentum.

The iShares MSCI USA Momentum Factor ETF (MTUM), which seeks to replicate the index, has been around since April of 2013 and is the largest momentum ETF.

But is this niche becoming too popular?

Rob Arnott and his team at Research Affiliates recently warned of the rising probability of a “smart beta crash.”

Basically, rising valuations explain much of the recent outperformance of several smart beta factors. If mean reversion occurs, then those chasing performance could be in for a rude awakening.

The three aforementioned funds are the largest pure-play momentum ETFs, and yet their combined assets under management (AUM) is just $ 1.9 billion. So, we haven’t seen a deluge of hot-money inflows… at least, not yet.

However, performance chasing may be pushing up the valuations of the underlying stocks.

MTUM’s price-to-earnings (P/E) ratio is a lofty 27.5 times. Thus, investors seem to have been herding into high-P/E stocks and that’s why their upward momentum has been so strong.

But keep in mind that momentum is constantly shifting, and the constituents of these funds change over time. This process is part of the beauty of the smart beta methodology.

True market anomalies are due to irrationality.

Conversely, if the momentum effect is due to a risk premium, then it’s not really an anomaly (and EMH proponents can rest easy).

In other words, if you’re taking on more risk in some way, then it would be expected that your returns would be higher.

As it turns out, there is an infrequent, but meaningful, risk…

A momentum crash is when stocks with the best momentum get trounced by those with the worst momentum.

According to research conducted by Kent Daniel and Tobias Moskowitz, the largest momentum crash was in July and August of 1932. This occurred well after the bona fide stock market crash in October 1929.

This type of event would be catastrophic for any hedge fund employing a long/short momentum strategy (shorts would dramatically outperform longs).

Of course, momentum investors would be hurt by a traditional stock market crash. But smart beta ETFs are diversified enough across sectors so that their decline should be in the vicinity of that of the broader market.

And if history is any guide, a prolonged bear market would actually provide an opportunity for momentum strategies to shine.

The most significant risk to momentum ETFs is dramatic underperformance after a bear market decline – when swift rebounds tend to occur. This underappreciated risk could also be a reason why the momentum effect seems to offer anomalous returns in “normal” environments.