Walgreens Boots Alliance (SO) has steadily grown its dividend for 40 straight years and has an operating history that dates back more than 100 years.

Few businesses have demonstrated such durability, and the ones that have are always worth a look for our Top 20 Dividend Stocks portfolio. After all, it takes meaningful competitive advantages for a company to survive for such a long period of time.

Walgreens scores extremely well for Dividend Safety (97) and Dividend Growth (88), but there is a lot more to this drugstore’s business drivers than many dividend growth investors perhaps realize.

Walgreens is a global leader in the retail pharmacy market with more than 13,100 stores in 11 countries. Walgreens Boots Alliance’s drugstores sell a range of prescription and non-prescription drugs in addition to a number of consumer products in categories such as beauty, personal care, and grocery.

Walgreens’ roots can be traced back to humble beginnings in Chicago in 1901, but the business has since expanded organically and through major acquisitions to become a leading international player.

Walgreens Boots Alliance operates in three segments. Retail Pharmacy USA is its largest segment and accounted for 69% of sales and 72% of segment income in its first quarter of fiscal 2016. This division consists of Walgreens and Duane Reade branded drugstores in the U.S.

Retail Pharmacy International represented approximately 12% of sales and 18% of segment profits and consists of Alliance Boots, one of the largest drugstores in Europe that Walgreens fully acquired in 2014.

The company also has a Pharmaceutical Wholesale business that generated 20% of sales and about 10% of segment income. This segment operates under the Alliance Healthcare brand and supplies medicines and a variety of healthcare products to over 200,000 pharmacies and other healthcare institutions from more than 350 distribution centers.

Retail pharmacy is a highly competitive and relatively mature industry. There are few noticeable differences inside of a Walgreens or CVS (NYSE:CVS) store, which causes companies in the industry to compete largely on price, brand recognition, and convenience of store locations.

The two major drugstores that dominate the market are Walgreens and CVS. Each player has done its part in consolidating the market.

The company purchased the rest of Alliance Boots in 2014 to give it a presence in faster-growing international markets and further expand its scale. With Alliance Boots, Walgreens became the biggest buyer of generic drugs in the world and expects to generate at least $ 1 billion in cost savings.

Most recently, Walgreens announced a deal to acquire Rite-Aid for $ 17.2 billion in 2015. This acquisition is expected to close in late 2016 and will provide better national coverage for Walgreens’ customers.

By acquiring other drugstores, Walgreens gains significant cost synergies from procurement savings on the purchase of drugs and merchandise. With more than 720 million prescriptions filled last fiscal year, Walgreens is one of the biggest purchasers of prescription drugs and healthcare products.

As such, the company can offer customers lower costs compared to its smaller rivals. Its 2013supply deal with distributor AmerisourceBergin is one example of the favorable contracts a company of Walgreens’ size can attain. Smaller retail pharmacy companies will become increasingly uncompetitive as their scale becomes even smaller compared to Walgreens.

In addition to economies of scale, Walgreens benefits from owning some of the best real estate in the country. According to the company’s annual report, approximately 76% of the U.S. population lives within five miles of a Walgreens or Duane Reade retail pharmacy.

Once its acquisition of Rite-Aid closes later this year, that number will increase even further as the company’s national coverage further expands.

Convenient store locations have helped Walgreens generate one of the top 100 most powerful brands in the world and make it an obvious shopping choice for many consumers. It also benefits from lengthy operating histories dating back to the early 1900s for Walgreens and 1849 for Boots Alliance.

In addition to its strong brand recognition and convenient store locations, Walgreens Boots Alliance’s websites receive about 68 million visits per month, providing a convenient platform for customers to refill their prescriptions.

By making it easy to refill orders, Walgreens gets more traffic through its doors. While prescriptions account for over 65% of revenue in the company’s U.S. stores, sales of retail merchandise carry higher margins.

As long as Walgreens makes it easy and affordable for customers to fill prescriptions with the company, it enjoys a steady base of sales.

Finally, it’s worth mentioning that Walgreens Boots Alliance should benefit as the elderly population continues to grow in size and healthcare reform results in more insured Americans, driving more demand for prescriptions.

While healthcare reform is resulting in several benefits for the company, it also poses several risks.

Change is often the biggest risk that companies face, and the U.S. healthcare sector is undergoing a major evolution as a result of the Affordable Care Act and a need to reduce costs.

In the U.S., 96.8% of Walgreens’ prescription sales last fiscal year were third party sales, where reimbursement is primarily received from managed care organizations. The government is doing all it can to reduce prescription drug costs and pharmacy reimbursement rates. The way drugs are priced is also rapidly changing.

Changes in Medicare and Medicaid funding and continued consolidation throughout the entire healthcare chain could pose unexpected challenges to Walgreens’ pharmacy operations. Margins could be compressed, or competition from low-cost retailers such as Walmart could increase and take away some store traffic.

The market’s growth can also be impacted by changes in the number and price of generic drugs. The generic drug wave has largely played out, and future trends are uncertain. Walgreens does best when new generics hit the market.

Walgreens Boots Alliance also faces risk from its acquisition binge. Big acquisitions often fail to create shareholder value, and Walgreens has made its biggest bets ever in recent years. If management fails to generate expected synergies or encounters unexpected integration challenges, the company will be challenged.

We analyze 25+ years of dividend data and 10+ years of fundamental data to understand the safety and growth prospects of a dividend.

Our Safety Score answers the question, “Is the current dividend payment safe?” We look at factors such as current and historical EPS and FCF payout ratios, debt levels, free cash flow generation, industry cyclicality, ROIC trends, and more. Scores of 50 are average, 75 or higher is very good, and 25 or lower is considered weak.

Walgreens Boots Alliance has one of the safest dividend payments in the market with a Dividend Safety Score of 97. The company’s strong safety rating starts with its payout ratio, which sits near 30% today. While Walgreens’ earnings payout ratio has nearly doubled over the last decade, it remains at a very healthy level.

The drugstore industry is also resistant to recessions. Consumers still need their prescriptions regardless of how the economy is doing, which helped Walgreens grow its sales during the recession. This is one reason why we consider healthcare to be one of the best stock sectors for dividend income. 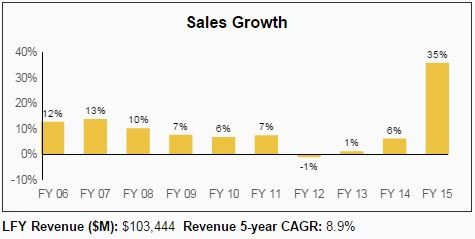 Walgreens’ business model also generates plenty of stable and growing free cash flow, which is needed to fund the dividend. The company’s mature store base and economies of scale throw off a lot of cash.

While Walgreens’ operations have a low operating margin near 5%, the company turns over its inventory rapidly to earn a strong return on invested capital. As seen below, Walgreens has created economic value by generating a double-digit return for most of the last decade, which is often the sign of a moat.

Turning to the balance sheet, Walgreens has about $ 2.6 billion in cash on hand compared to $ 13.2 billion in debt. After the deal for Rite-Aid closes, the balance sheet will become a bit overleveraged. Moody’s has placed Walgreens’ credit ratings on review for a downgrade.

While the company’s large acquisitions have increased risk, the company’s consistent cash flow generation reduces some of our concern and easily protects the dividend.

Our Growth Score answers the question, “How fast is the dividend likely to grow?” It considers many of the same fundamental factors as the Safety Score but places more weight on growth-centric metrics like sales and earnings growth and payout ratios. Scores of 50 are average, 75 or higher is very good, and 25 or lower is considered weak.

Walgreens’ Dividend Growth Score of 88 indicates that the company has very strong dividend growth potential. Walgreens has increased its dividend for 40 consecutive years and is a member ofthe dividend aristocrats list. Perhaps even more impressively, Walgreens has paid uninterrupted dividends for 83 straight years.

As seen below, Walgreens has recorded impressive dividend growth. The company’s dividend has increased by 20% per year over its last 10 fiscal years, although growth has slowed to a high-single digit pace more recently.

With the company working on integrating several major acquisitions and restoring its balance sheet, dividend growth will likely remain at a mid- to high-single digit pace for the time being.

Walgreens Boots Alliance also targets a long-term dividend payout ratio of 30% to 35%, which is where the company is at today. In other words, dividend growth will more closely align with earnings growth going forward.

Investors are betting on Walgreens achieving substantial synergies from its recent acquisitions, which could help drive its earnings growth rate into the high-single digits or low double-digits.

Given the number of moving parts to Walgreens’ story, we think the stock appears to be at least fairly valued today.

The healthcare landscape is rapidly evolving. While more Americans are now insured, driving prescription volumes higher, there is immense pressure to make the healthcare system more efficient and take out costs.

Government-funded reimbursement models are changing and putting pressure on lucrative rates enjoyed in many pharmaceuticals markets. These changes, amongst others, are causing the entire distribution chain that delivers drugs from manufacturers to patients to consolidate.

While Walgreens is much better positioned than its smaller rivals, its large acquisitions of Alliance Boots and Rite-Aid come with integration risks and are a signal of the need for further consolidation to protect profits.

We think Walgreens Boots Alliance is still a blue chip dividend stock, but we would prefer to buy at a more favorable valuation or receive more clarity on how healthcare reform will reshape the business over the next few years.

Disclosure: The author has no position in WBA.