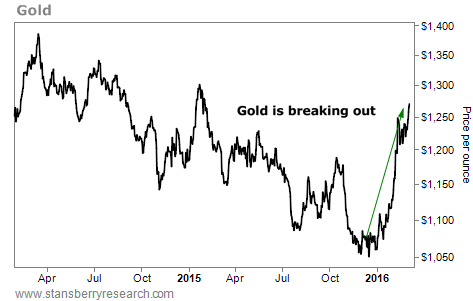 Why Gold Could Climb Nearly 20% in the Next 12 Months

Gold is up… And it could go up a lot more… A gain of 16% to 19% over the next year is entirely possible, based on history.

Yesterday, I told you about the buying opportunity that just appeared in the Japanese yen. The story for gold today is nearly identical – but the potential gains are much bigger.

The yen has three things in its favor:

These last two things had led to great returns over the NEXT 12 months, based on history.

Gold is in almost the same situation as the yen – but as I said, the upside is much greater…

This breakout comes thanks to that big 8% gain in January… and another 11% gain in February. But monthly gains of that size are rare.

This has only happened 7% of the time, going back to 1975. Importantly, this extreme monthly move is a good thing for gold prices going forward… The table below shows the full details…

More than 40 years of history show that when gold climbs 8% or more in just one month, it tends to outperform going forward. And that outperformance is consistent, regardless of the time frame.

Importantly, based on the extraordinary performance in January, gold could deliver a gain of up to 19% over the next year.

Like the Japanese yen yesterday, it’s not just the one-month move that’s important…

Gold is actually “up” over the last 12 months. This is big news.

Again, like the yen, gold does extremely well after a positive 12-month performance. Take a look:

Specifically, this is the performance of gold in the month AFTER a positive 12-month gain, annualized.

In short, you want to own gold, now.

Yes, gold has done well… but based on history – these solid recent gains tell us that we could have more to come.

Editor’s note: In this month’s issue of True Wealth Systems, Steve and Brett alerted readers that their gold “Super Signal” is finally back. This gold system has delivered outstanding 46% annualized gains when in “buy” mode over the past 40-plus years.

This signal is rare… But their computers are now giving the all-clear to buy gold. You can learn exactly how you should be taking advantage of this opportunity with a subscription to True Wealth Systems. Click here to learn more.

Further Reading:
“When several of our analysts are bullish on the same thing, you should pay attention,” Sean Goldsmith writes. “That’s often when the biggest gains come.” Learn what some of our analysts are saying about gold in this essay from last month: This Could Be the Start of the Next Great Bull Market in Gold.

Before you invest one dime in natural resources like gold, this classic interviewwith master resource investor Rick Rule is a must-read. In it, he reveals everything you need to know to master the resource market’s cyclicality. If you catch one of these big cycles at the wrong time, you can lose a fortune. But if you catch one early, you may never have to work again…