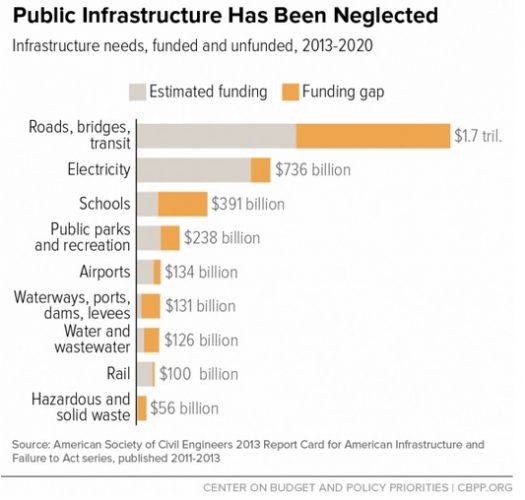 My No. 1 Pick for Profiting From a Trillion-Dollar Problem

Boom! I heard an explosive noise in the split second before the lights went out at my local supermarket. A transformer had blown, and it was the second time in a week that I had heard one.

The semi-drought conditions brought on by El Nino have limited electricity production here in Colombia, exacerbating the issue of lagging spending on infrastructure, especially the power grid.

But before you write this off as a third-world problem, the incident reminded me of an article I saw last week outlining the $ 3 trillion-plus experts say the United States needs to spend on infrastructure.

In fact, this could be one of the strongest long-term investing themes we’ve seen in a while, and one best-of-breed company could be about to cash in big on it.

The World Economic Forum (WEF) estimates an annual gap of $ 1 trillion in global infrastructure spending, equal to about 1.4% of global GDP.

In the United States, state and local spending on infrastructure is at a 30-year low, according to a report by the Center on Budget and Policy Priorities.

At the same time, the WEF notes that much of the existing infrastructure is approaching the end of its expected lifespan. For instance, the country’s 600,000-plus bridges have an average age of 42 years, which is still relatively young compared to the average age of the nation’s 84,000 dams at 52 years.

The American Society of Civil Engineers estimated the United States needs more than $ 3.4 trillion in infrastructure spending between 2013 and 2020, and as you can see below, much of that has yet to be funded.

Congress did pass a $ 305 billion, five-year highway and transit spending bill in December after years of delay, but that is just a drop in the bucket given the projected spending needs.

In addition to lagging government spending, companies in this space have been slammed by falling oil prices as energy companies cut capital spending.

Yet, while spending in the oil and gas sector may be limited over the next couple of years, a massive backlog of projects and a rock-solid balance sheet should help one company take advantage of weakness in the industry.

The Company Set to Benefit From the Trillion-Dollar Gap

Fluor (NYSE: FLR) is one of the world’s largest and most respected engineering and construction companies. At the end of 2015, it had a $ 44.7 billion backlog of projects, with roughly 40% of those in the United States.

More than half of last year’s sales came from the oil and gas segment, but within that are petrochemical and refining projects, two areas that are doing well in the low oil price environment. In fact, management recently said it expects to secure enough oil and gas projects this year to maintain its backlog in the space.

What surprised me most about Fluor is the strength of the company’s balance sheet at a time when much of the industry is burdened by heavy debt loads.

At the end of last year, Fluor had $ 2.15 billion in cash against long-term debt of just $ 993 million and total assets of $ 7.6 billion. The first debt maturity isn’t due until 2021, so the company is in a very strong position with regard to available capital. Free cash flow increased to $ 609 million in 2015 even after $ 240 million in capital investment spending.

Shares look relatively cheap at 16.8 times trailing earnings compared to a five-year average of 19.7. Management appears to be taking advantage of this by buying back shares. They purchased $ 728 million worth of the company’s stock last year.

Besides continued share buybacks, I expect management to look for acquisition targets and assets from weaker players in the industry.

Boost Your Return on This Long-Term Buy

I think FLR is a solid long-term buy, but using a simple covered call strategy, we can collect cash upfront while we wait for shares to rebound.

If FLR closes below the $ 50 strike price on July 15, we keep the premium and the shares and can sell additional calls to collect even more cash. Given the massive infrastructure spending gap, I am bullish on the company long term and wouldn’t mind holding on to shares.

Last year, one of my colleagues skimmed $ 46,360 from some of the largest firms on Wall Street using a similar strategy on stocks just like Fluor. The money was just sitting there for the taking — she simply beat Wall Street to it.