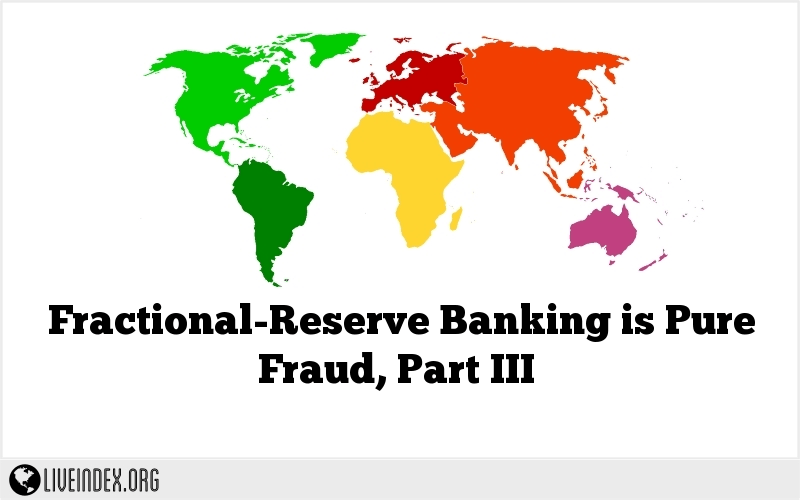 In Part I , readers were presented with the inherent criminality and fraud of the crime-euphemism known as “fractional-reserve banking.” In Part II , readers saw how the banking crime syndicate has exploited the opportunities that this institutionalized fraud presents and turned our entire financial system into a teetering Ponzi scheme about to suffer its final collapse.

Yet despite the inherent criminality of fractional-reserve fraud and the overwhelming evidence of the economic carnage that it has produced, there are still legions of Apologists who will argue to their dying breath that we need all of this institutionalized fraud and the inevitable boom/bust-collapses it produces. These sycophants and zealots have been brainwashed with the economic mythology, produced by the banksters themselves, that such institutionalized fraud is somehow necessary for a healthy economy.

This will be the subject of Part III. First we will explore the implications of this mythology and expose its absurdity. Then readers will be presented with a model of economic sanity in order to compare and contrast the difference between the paradigm of economic fraud created by the Big Bank crime syndicate and true “economic health.”

It is tempting to equate fractional-reserve fraud with being “a financial system on steroids.” The one similarity is obvious: it is a form of cheating to obtain a result that the Cheater could not obtain via any legitimate means. However, there is one, crucial difference between a person using/abusing steroids and fractional-reserve fraud.

With the steroid-user, it is not a certainty that the user will suffer some catastrophic adverse outcome. There is merely a high probability of such an outcome. With fractional-reserve fraud, as with all Ponzi schemes, the probability of catastrophic implosion is a 100% certainty. We opt to have a juiced-up economy today at the cost of a guaranteed financial Armageddon for our children (or grandchildren).

This one reality alone totally negates any possible legitimacy for fractional-reserve fraud. No sane society would ever doom its children or grandchildren to such a fate simply to “have more” for itself today. Rather, we have been deluded into believing (like the chumps of all Ponzi schemes) that this extreme fraud can somehow continue forever.

However, we do not need to focus solely on the approaching Armageddon to disprove the mythology that fractional-reserve fraud helps our economies more than it hurts them. To do this, we need merely look at what the banking crime syndicate does with all of the funny money that they are allowed to conjure out of thin air.

For readers who require a reminder: our present system of fractional-reserve fraud supposedly limits the fraud-ratio of these banks to “merely” somewhere between 16:1 and 24:1. Unofficially (as explained in Part II), fractional-reserve fraud has become no-reserve fraud . The Big Banks can practice virtually infinite “leverage” (i.e., fraud), and thus potentially conjure virtually infinite amounts of funny money . Themagnitude of this fraud will become fully apparent in the concluding installment of this series.

With infinite amounts of their own funny money to play with, what do the banksters do with their gigantic mountains of virtual paper? They either “lend it” (lending what does not exist), or they gamble with it. That’s it. We allow a financial crime syndicate to manufacture near-infinite amounts of worthless funny money (every penny of which goes into their own vaults), and with all this funny money, they only do two things: gamble and lend.

Want historical proof that fractional-reserve fraud always ends in financial Armageddon? It’s called “Debt Jubilee”: 2,000+ years of empirical evidence showing that whenever we allow these parasite-bankers to perpetrate their fractional-reserve fraud, it results first in enslaving the population in parasitic debt, and then in Jubilee, as the Slaves rise up and demand their freedom from the Parasites.

The global economy is now drowning in at least $ 200 trillion in official debt (and much more unofficial debt), while generating total GDP of less than one-third of that amount. It is no longer a question of “if” the global economy (and particularly the West) implodes/defaults on that debt, it is only a question of when. Again, no sane society could ever believe that it “needs” to be placed on a financial treadmill of fraud, which carries it to only one possible destination: Debt Slavery, and then repudiation of that debt as the economy collapses in debt-default.

However, this is only one side of the insanity of fractional-reserve fraud and has been covered in many previous commentaries. The other half of the inevitable insanity is the gambling. Here the empirical evidence is far more overwhelming.

Freed from the slightest constraints of legitimacy, how much gambling have the banksters done via their fractional-reserve fraud? Here we only need to look at one category of their gambling – the largest. This is what the banking crime syndicate calls “the derivatives market.”

The derivatives market is a totally illegal bookmaking operation, which the banking crime syndicate operates without any (effectual) outside supervision/regulation. Once again, the banksters were grantedlegal immunity to pursue this crime, as the laws that were previously in place to prevent such gambling (for nearly a hundred years) were torn up to allow the Big Banks to gamble even more rapaciously than they lend.

How much illegal gambling?

We no longer even have access to precise statistics on this illegal casino of fraud. When the “derivatives market” had already swollen to a cesspool of gambling that exceeded $ 1 quadrillion ($ 1,000 trillion), the crime syndicate simply changed its “definition” of this casino. Overnight, the derivatives market officially shrank by roughly 50%. This illegal casino is now also cloaked in secrecy.

We need this? How?

Again, as with the unsustainable mountains of debt, even the Perpetrators themselves know that their casino of fraud is yet another terminal Ponzi scheme. Indeed, we already saw this market completely implode in 2011, when the government of Greece defaulted on $ 300 billion of bond debts.

Those debts were all (supposedly) “insured” via the Big Bank’s credit-default swaps: default insurance. The heavily-leveraged pay outs on that $ 300 billion of bad debt would have totalled in the many trillions of dollars, completely vaporizing the Big Bank crime syndicate, which carries virtually zero collateral to “back” this supposed insurance.

How did the banksters avoid their own, complete annihilation in 2011? They simply refused to pay out on their credit default contracts. The “House” refuses to pay when it loses. How many times can they get away with such overt fraud before their illegal casino simply collapses due to a collapse in confidence?

This is the world we have reaped from listening to the bankers and allowing them to map out the course of our economies. We have ridiculously unsustainable mountains of debts, which must end in Debt Jubilee . We have ridiculously unsustainable mountains of bets, which can only end in an even larger and more catastrophic implosion.

Is financial/economic suicide our only option in choosing an “optimal” economic system? Obviously this is what the banking crime syndicate wants us to believe, and it has drowned us in propaganda that asserts such insanity. It is equally obvious, however, that we can do better than suicide.

How do you improve upon a system that is hopelessly and obviously unsustainable? The question could not be more elementary. We create a sustainable system . We “create” what we used to have before these financial snake oil salesmen deluded us into believing they could give us something better.

What did we have before we had the bankers’ unlimited fractional-reserve fraud? We had a gold standard: honest money, and thus an honest and sustainable financial system. Why was it abandoned? Because this financial crime syndicate did everything in its power to undermine our previous monetary system.

They deliberately created financial “shocks” to the system, as frequently and severely as possible, to attempt to frighten/bully us into abandoning our honest money system. It worked. But here it must be noted that no matter how much the banking crime syndicate schemed against the previous (honest) system, the “problems” produced by such sabotage were microscopic in comparison to the carnage they have created since we abandoned the gold standard.

To say that the bankers’ “cure” (fractional-reserve fraud and fiat currencies) was worse than the “disease” (their sabotage of the gold standard) is one of history’s greatest understatements. With our gold standard, our economies never came close to being bankrupted. Our “money” was real money, which preserved its value, not the worthless paper confetti produced by fractional-reserve fraud.

The previous problems that our governments encountered in administering the gold standard were never “proof” that the gold standard was flawed. Instead, such “problems” were conclusive evidence that this Big Bank crime syndicate (which readers know as “the One Bank” ) had already grown much too large and much too powerful.

We do need a gold standard. We do need honest, sustainable economies. What we don’t need, and have never needed, and could never need, are Big Banks. If this was not already totally apparent to those reading this series, it will become apparent in Part IV. In the conclusion of series, we will see the ultimate insanity of today’s fractional-reserve “banking”: literally infinite financial fraud.