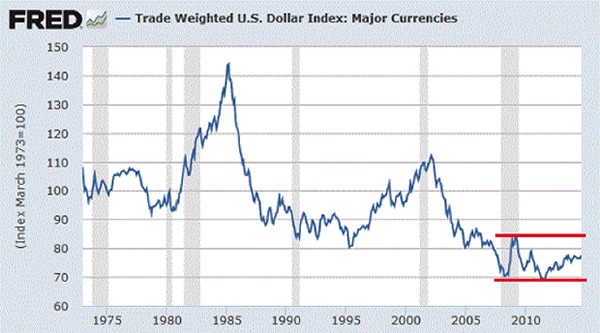 How Much Higher Can The U.S. Dollar Go?

Let’s start our examination of the U.S. dollar (USD) by recalling the chart from my August 2014 essay, Why the Dollar Could Strengthen—A Lot.  At that point, the USD had moved modestly off its lows, and had yet to challenge long-term resistance around 80. 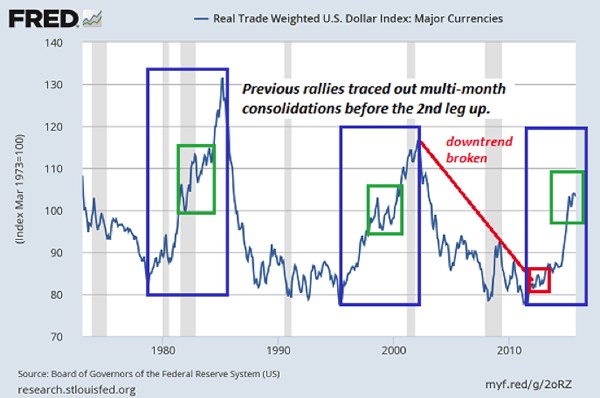 The USD broke out of its multi-year downtrend and soared above 100. Needless to say, the USD did in fact strengthen a lot.  After that initial leg up, the dollar has remained in a consolidation range for much of 2015. Though it recently broke out of a wedge/triangle formation to the upside, it’s not yet clear if this is a definitive move higher or more consolidation. 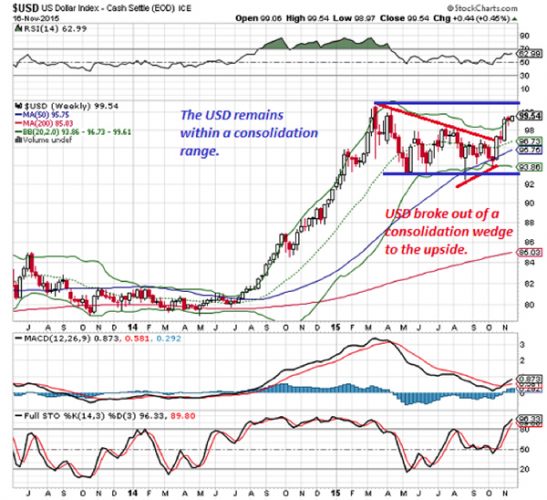 Is the Dollar Rally Done?

So is the dollar rally done, or could it move higher?

Our first observation is that trends in the USD tend to last for some time, so if this rally follows the pattern of previous rallies, it’s unlikely to have run its course in one year.

Secondly, previous rallies paused for a multi-month consolidation period before launching upward for the second leg of the long-term rally.

Thirdly, the USD rose sharply to previous peaks and then round-tripped back to the 80 level.

This raises the question: How high could the dollar rise in this rally?

How High Could the USD Go?

How high could the USD rise before it tops out?  Last November, when the dollar had just punched above 85 for the first time in years, I posted this chart that suggested 120 was “not impossible:” 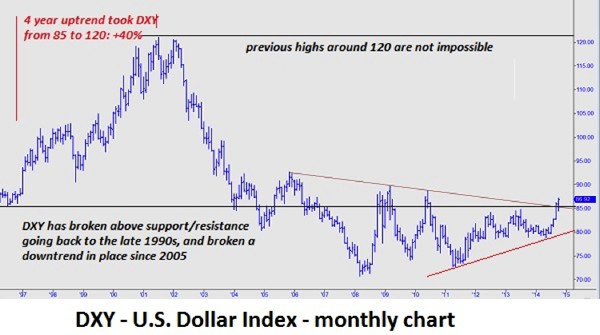 The current rally has already made it halfway to this target (from sub-80 to 100+). If we look again at the FRED chart above (the current Real Trade Weighted Dollar Index), we see that the consolidation periods have occurred roughly mid-way in the rallies. This is supportive of the idea that the initial 20+ point advance could be followed (after the consolidation phase ends) by another leg higher of approximately the same size (20+ points).

That would get the dollar Index to the 120 target.

Beyond 120, there are additional “impossible” targets defined by previous rallies:  depending on the chart (Real Trade Weighted Dollar Index from FRED, DXY or USD on charting services), these targets range from 130 to 165.

Who Would Suffer If the Dollar Moved Higher?

Any move higher in the dollar would encounter serious resistance from everyone whose positions, sales and profits would be negatively impacted by a soaring dollar.

Any move above current levels around 100 would cause tremendous pain for many powerful participants. U.S. global corporate profits, already under pressure from the stronger dollar, would suffer from the worsening exchange rate, and that would pressure U.S. stock markets that are at least theoretically based on profits.

The effects of the stronger dollar on profits is visible in this chart. Note that while pundits and apologists are quick to blame “weather” for lagging sales, corporations overwhelmingly identified the rising USD as the cause of profit warnings, not the weather or geopolitical issues. 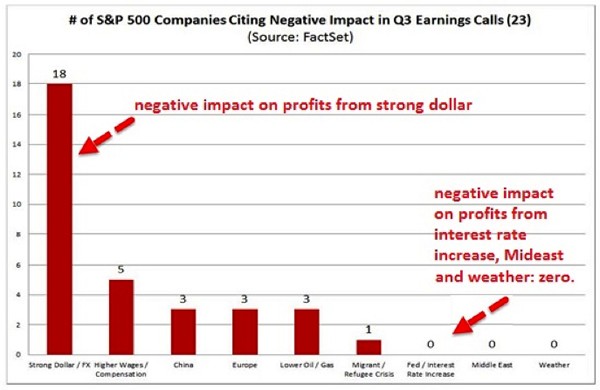 Everyone who took out loans denominated in USD while their revenues/earnings are in a currency that’s losing value against the dollar will suffer as well.

If an enterprise earning euros borrowed in dollars when the euro was 1.40, consider what happens to their USD-denominated loan payments now that the euro is 1.07.

Where is once took only .72 euros to pay $ 1 in principal and interest on the dollar-based loan, now it take .94 euros to pay that same $ 1. That’s a 30% increase in loan payments, just from the rising dollar and the declining euro.

This dynamic is even more punishing to those who borrowed dollars to fund carry trades in other currencies.

What is a carry trade?

If the currency the bond is denominated in rises in value against the USD, traders get a bonus gain from the appreciation.  For example, those who borrowed yen to buy U.S. Treasury bonds have reaped a nice profit as the USD has rocketed higher against the yen.

But the reverse is less pleasant. As the USD rockets higher, the profits earned in weakening currencies decline when stated in dollars, while the amount due on the dollar-denominated loan has soared when the payments are converted to the local currency.

Using our euro-USD example: the profit on the carry trade plummets (when converted to USD) while the amount of euros needed to pay the loan in USD soars.

A rising USD is a double-whammy to carry trades based on borrowed dollars.

The sums of money being gambled in carry trades are enormous. According to the Telegraph newspaper (U.K.), roughly two thirds of the $ 11 trillion in cross-national loans are denominated in U.S. dollars. That suggests that over $ 7 trillion in carry trades have turned sour.

If the dollar continues rising, those sour carry trades quickly become catastrophic for everyone who borrowed dollars to buy assets in a weakening currency.

Everyone who took loans denominated in dollars needs dollars to service the loan and pay it off. That demand is clearly one factor pushing the USD higher.

In Part 2: Why The Coming Currency Crisis Will Push The USD Higher, we detail why we can anticipate the next global financial crisis will originate in the currency market, and how this will inevitably push the USD higher, which will increase the pressure on carry trades, adding fuel to the USD fire. Perhaps ironically, a much stronger dollar will put tremendous downward pressure on U.S. stock markets in 2016.