The Investor Revolt Arrives: This Hasn’t Happened Since Q4 2008

There’s little question that the collapse of the financial universe in 2008 dealt a dramatic blow to retail’s confidence in US capital markets. Taxpayers were forced to foot the bill for a Wall Street bailout just as 45% of their 401ks was being vaporized and to make matters immeasurably worse, CNBC ensured that mom and pop could watch their retirements disappear in real time on the same channel that had, for the better part of a year, been telling them that everything was fine.

To the extent that the Fed-driven, six-year rally restored some semblance of trust between retail investors and Wall Street, it was wiped away for good on Monday when, in a harrowing day of flash-crashing mayhem, the perils of broken, manipulated markets were laid bare for all to see and to add insult to injury, the ETF pricing model blew up causing some funds to trade far below NAV.

Given that, and given how predisposed household investors are to mistrust Wall Street in the post-crisis, post-Flash Boys world, retail outflows during uncertain times (like those that began last month when China’s stock market collapse began to make national news) shouldn’t come as a surprise, but as Credit Suisse notes, something happened in July and August that hasn’t happened since Q4 of 2008: retail investors pulled money from both stocks and bond funds.

In other words, mom and pop were selling everything. 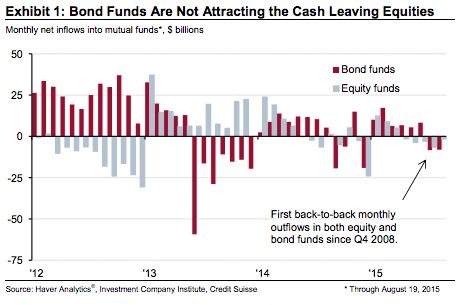 We observe that the latest weekly estimates from the ICI indicate these retail investment outflows began gaining strength in Q3 2015. Data to date suggest that we will see the first example of back-to-back monthly outflows from both equity and bond mutual funds (in July and August 2015) since Q4 2008.

Credit Suisse estimates $ 6.5 billion left equity funds in July as $ 8.4 billion was pulled from bond funds, citing weekly data from the Investment Company Institute as of Aug. 19. Those outflows were followed up in the first three weeks of August, when investors withdrew $ 1.6 billion from stocks and $ 8.1 billion from bonds, said economist Dana Saporta.

“Anytime you see something that hasn’t happened since the last quarter of 2008, it’s worth noting,” Saporta said in a phone interview. “It may be that this is an interesting oddity but if we continue to see this it could reflect a more broad-based nervousness on the part of household investors.”

Withdrawals from equity funds are usually accompanied by an influx of money to bonds, and an exit from both at the same time suggests investors aren’t willing to take on risk in any form. While retail investor sentiment isn’t the best predictor of market moves, their reluctance could have significance, Saporta said.

“It might suggest households are getting nervous about holding investments, and that could lead to some real economic implications including cutting back on spending,” she said. “Should the market turn lower again, it will be interesting to see if we have the traditional move back into bonds or if households move to cash.”