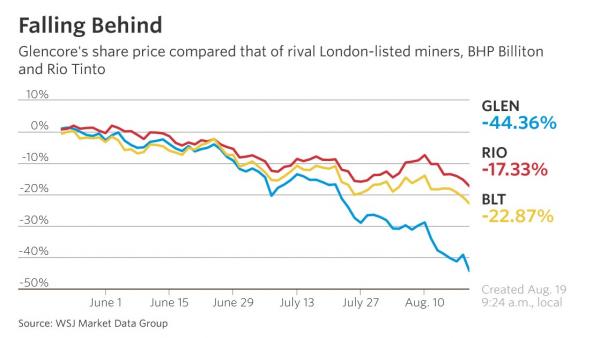 The Next Leg Of The Commodity Carnage

Today we got our answer.

Commodity trading giant Glencore may have top-ticked the commodity supercycle with its 2011 IPO, but it’s been downhill ever since (66% downhill to be precise if measured by the tumble in the stock price), culminating this morning when the Baar, Switzerland-based mining and commodity giant reported a first half net loss of $ 676 million, compared with net profit of $ 1.72 billion a year ago.

Revenue tumbled 25% to $ 85.7 billion after the company admitted China’s economic slowdown had caught the company “by surprise” and that no one in the mining industry “can read China” at the moment. The result: GLEN stock had plunged by 9% as of the last check, wiping out $ 3 billion in market value, and down a whopping 44% in the past three months, substantially underperforming its peers Rio Tinto (which Glencore once tried to acquire) and BHP Billiton.

In addition to the poor earnings, the company slashed both its operating outlook and its spending plans: Glencore said it expected trading, or what the company calls its marketing division, to post full-year earnings before interest and tax of $ 2.5 billion to $ 2.6 billion. Glencore Chief Executive Ivan Glasenberg had previously said he expected the trading division to generate $ 2.7 billion to $ 3.7 billion in full-year earnings before interest and tax “no matter what commodity prices are doing”.

It would appear what commodity prices are doing mattered after all.

Perhaps more concerning is that as a result of Glencore’s 29% EBITDA tumble to $ 4.6 billion the company’s default risk as measured by its CDS, had surged to the highest in over two years. The reason is that while the company has been deleveraging its debt load “somewhat” it appears not to be enough, and now fears have appeared that at this rate, Glencore may lose its investment grade rating soon. CEO Ivan Glasenberg hinted as much when during the conference call he said a a modest rating cut was manageable. “Even if we drop one notch, it isn’t a high cost to the company,” he said on the call. To many this sounded like a confirmation that a downgrade is imminent.

The company attempted to smooth over the damage when it said it lowered net debt by almost $ 1 billion to $ 29.6 billion, by reducing capital expenditure together with lower requirements for funding working capital at its trading business, adding that Glencore plans to reduce net debt to
$ 27 billion by the end of 2016, while maintaining its dividend-payment
plans.

However, judging by the stock and CDS price chart below, it did not quite achieve the desired result. 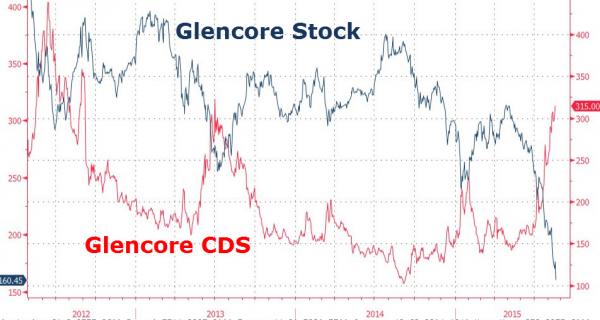 The FT summarizes the company’s cap table, which is not pretty: “The value of the company’s shares has shrunk to £22bn, compared with net debt of $ 29.6bn excluding inventories of $ 17bn it says it can sell swiftly. Glencore aims to maintain dividends, which cost more than $ 2bn a year, alongside a ratio of net debt to earnings of under three times. At an estimated net debt level of $ 27bn, earnings of $ 9bn will be required in 2016.”

In other words, a dividend cut for Glencore now appears in the cards, and is virtually inevitable if copper, which is trading under $ 5000 at six year lows and is massively levered to how China’s economy dies, is unable to stage a bounce.That looks increasingly unlikely especially following the recent breach of copper’s 15 year support trendline: 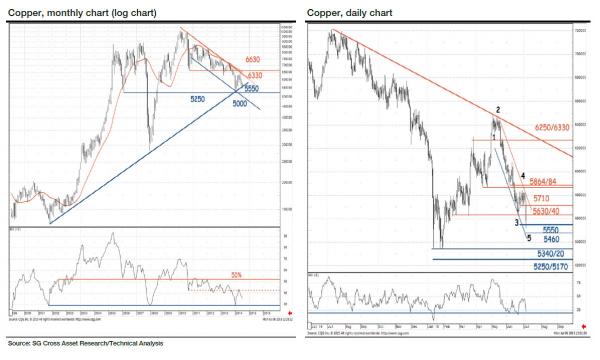 Why copper? As Reuters reminds us, formerly just a commodities trader, Glencore merged with mining company Xstrata in 2013. The marketing business was seen as a plus in diversifying earnings of the combined company as its success was not so closely tied to commodity prices.

The price of copper, Glencore’s largest earner, is at six-year lows weighed down by a slowdown in China, one of the world’s biggest consumers of metals and other raw materials.

“We are still looking for growth in both copper and zinc production in the second half of 2015 and then continuing in 2016,” Kalmin told Reuters. “Those in particular are the two commodities that we see going forward fundamentally looking in much better shape than other commodities.”

Coal prices, another major commodity for Glencore, also show no sign of recovering due to a supply glut.

Yet despite the collapse in coal, copper and other commodity prices, Glencore has been slow to adjuts. Competitor Rio Tinto this month said it planned $ 1 billion in cost cuts this year and Anglo American is to cut thousands of jobs in the next few years and may sell assets. Analysts had expected deeper cost cuts by Glencore to ease the strain on its debt levels and protect its credit rating. However, perhaps in expecting yet another dead cat bounce, the Swiss company has so far avoided dealing with the looming commodity crunch. Its stock is reflecting that this morning.

Worst of all, however, is that while Glencore’s existing commodity exposure as a result of its miner “hybrid” nature may go up and down, its trading operation was supposed to be a natural hedge to deteriorating fundamentals: after all, commodity trading should be vibrant even when (and perhaps especially) prices drop. That also did not happen: the company’s trading division reported a 29% drop in first-half adjusted EBIT to $ 1.1 billion over the same period, lower than some analysts expected. According to the WSJ, the company blamed everything but itself for this disappointment:

Glencore blamed tough trading conditions, particularly in aluminum and nickel, as well as coal markets. A slowdown in Chinese economic growth caught the company by surprise, it said, restricting access to credit there and softening demand. All that squeezed trading profits.

The company’s agricultural-trading division also suffered, due in part to Russia’s unexpected imposition of a new Russian export tax in February. The only bright spot in trading was in energy, where volatility in the oil markets helped the company report a profit despite the slump in coal prices.

But the punchline came during the call when Glasenberg blamed “speculators”, not so much China, for the lower commodity prices. Of course, it goes without saying that when commodity prices were at record highs, it was all thanks to the fundamentals.

In any event, while the market remains focused on the miners, our warning from one month ago remains more relevant than ever: the real surprise will be the traders: the Glencores, Mercurias and Trafiguras of the world, who may indeed be quietly liquidating billions in paper commodity exposure.

And not just them: yesterday we noted the ongoing collapse in Asia’s largest commodity trader, Noble Group. This is the real canary in the Asian coal, and copper, mine. Judging by the ongoing blowout in Noble Group CDS, up another 48 bps since yesterday’s note…

… the pain in the commodity world may be about to get a whole lot worse especially if Noble Group suffer a liquidity/capitalization ‘event’ and is forced to liquidate any of its billions in commodity holdings.

It is at that point that we will see just how immune to the commodity carnage the US stock market truly is.