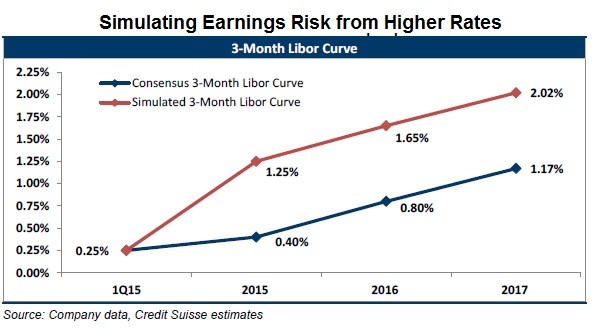 The odds of a September interest rate hike surged to 52% on Wednesday, up from 38% at the beginning of the week. The jump — which came on the back of surprisingly strong U.S. service-sector growth and comments by Atlanta Federal Reserve President Dennis Lockhart — caused some rate-sensitive stocks to plummet.

The market has been building up to a rate hike all year, which has resulted in a few sectors getting hammered. The Utilities Select SPDR ETF (NYSE: XLU) is off more than 7% year to date, while SPDR Gold Shares (NYSE: GLD) is down more than 8%.

But one sector that’s taken a hit may not be as sensitive as the market expects.

One of the greatest benefits to real estate investing is the ability to leverage returns through debt. Real estate investment trusts (REITs) have taken advantage of this in a big way. The average REIT carries 31% of its total market capitalization in debt. Combine this with the fact that more than 90% of profits must be paid out as dividends, and interest rates become extremely important.

REITs generally carry a lot of short-term and variable-rate debt because rates are lower relative to long-term and fixed-rate debt. This is fine when rates are falling or stagnant, as has been the case since late 2007, but it’s not so good when rates start increasing.

The changing rate environment has hurt sentiment in the sector, and pundits are advising investors to avoid it ahead of rising rates. But the fear of higher rates and their effect on REITs looks overblown.

Most REITs have worked to refinance their variable and short-term debt to fixed rates with longer maturities to limit the impact of higher rates in the near term. Among the 34 REITs in the Credit Suisse coverage universe, average variable debt was just 14% of total issued, and debt maturing in the next three years accounted for less than half (41%) of total debt.

Therefore, higher rates might not affect actual earnings as much as feared, and the sell-off in the sector could be a buying opportunity.

Credit Suisse found little impact on REIT earnings from higher rates in a model it ran last month. It looked at the impact from a 100-basis-point increase in rates this year, which would bring the 3-month Libor curve to 1.25%, followed by an increase to 1.65% in 2016. For 2016, the average estimated impact on earnings was a decrease of just 1.7%, along with a 1.8% reduction in funds from operations (FFO).

The spike in rates used for the model is well above what is expected. Based on current futures rates, the CME Group FedWatch shows an implied probability of just 15% that rates will be as high as 0.75% in December. And there is only a 23% chance they will be above 1.5% by September of next year.

After the sell-off this year, REITs are trading at an attractive discount of 8% to their net asset value, compared to a long-term premium of 1% to NAV. The Vanguard REIT ETF (NYSE: VNQ), the largest and most actively traded REIT fund, is 12% off its 52-week high. Not only do I see the opportunity for upside potential, but there is a way traders can buy it at an even deeper discount.

I plan to use a put selling strategy to benefit from this trading opportunity. If you’re unfamiliar with this strategy, watch this short video guide to learn how to execute it.

VNQ offers diversification across 145 individual REITs. The fund holds its largest weight in retail REITs (25%), followed by residential (17%), office (17%) and health care (13%). I like the overweight in retail and office because the segments should do well on a strong economy even as rates increase. Additionally, the fund charges an expense ratio of just 0.26%, well below the 3.9% yield paid on shares.

To cover this potential obligation, we want to make sure we have enough money in our account. This means setting aside $ 7,500 for every put contract we sell — $ 7,800 for 100 shares minus the $ 300 we collected from selling the puts.

The December options expire just after that month’s FOMC meeting. I expect the market to realize that a slow-and-steady increase in rates will not negatively affect REITs as much as expected and recognize their value. But if we do end up owning shares, my plan is to “rent” them out to other investors.

If you’re not doing this with the stocks in your portfolio, then you’re passing up hundreds in income each month. To learn how it works, simply click here.