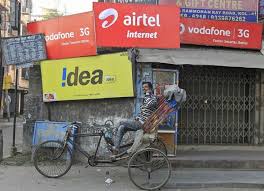 Telecom providers in India pay the Department of Telecommunications (DoT) nearly 3-5% of their adjusted gross revenue (AGR) in usage charges for spectrum or airwaves and 8% of AGR as licence fees.

The DoT and the mobile carriers have been at odds over the definition of AGR. The companies argue that AGR should comprise just revenue accrued from core services, while the DoT says AGR should include all revenue.

After the court decision, shares in Bharti Airtel (BRTI.NS) dropped as much as 9.7%, while Vodafone Idea (VODA.NS) fell as much as 23%.

Bharti Airtel and Vodafone Idea expressed their disappointment at the order.

“This decision has come at a time when the (telecoms) sector is facing severe financial stress and may further weaken the viability of the sector as a whole,” Airtel said in a statement. The company also said New Delhi needed to find a way to reduce the burden on the industry.

Vodafone Idea said the judgment was damaging for India’s telecom industry, which was already under financial strain.

Reliance Industries’ telecoms venture Jio Infocomm began operations in late 2016 and has a smaller backlog of charges to clear.

The local telecoms lobby group, the Cellular Operators Association of India, said taxes and levies in the country were already among the highest in the world and that it was uncertain whether the sector would be able to recover from this setback.

India’s crowded telecoms sector once had more than a dozen mobile operators but operating costs and their own inefficiencies has led to consolidation.

The launch of telecoms services by Jio with free voice and cut-price data pushed rivals to match prices, a factor that weighed on profitability.