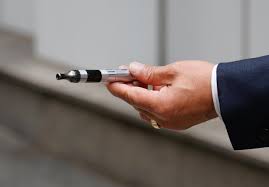 South Korea’s top convenience store chain suspended the sale of flavoured liquid e-cigarettes made by U.S. company Juul Labs on Thursday, a day after the government warned the public to stop using such products citing fatalities in the United States.

The GS25 chain halted sales of three of Juul Labs’ products including “tropical” – the equivalent of mango in the United States – and one made by South Korean company KT&G (033780.KS), store parent company GS Retail (007070.KS) said.

The firm would consider dropping all liquid e-vaping products if an ongoing government investigation found them to be dangerous, it added.

Juul Labs said its e-cigarettes were safe and provided an alternative to traditional cigarettes.

“Juul Labs is hoping to have dialogue with GS25 officials continuously and provide an alternative option for adult smokers in the country,” Juul Labs said in a statement.

Countries around the world have been pulling electronic cigarette products from markets and restricting advertising as vaping faces increased scrutiny.

South Korean Health Minister Park Neung-hoo cited cases of lung injuries associated with e-cigarettes in the United States as he warned of a “serious risk to public health” on Thursday.