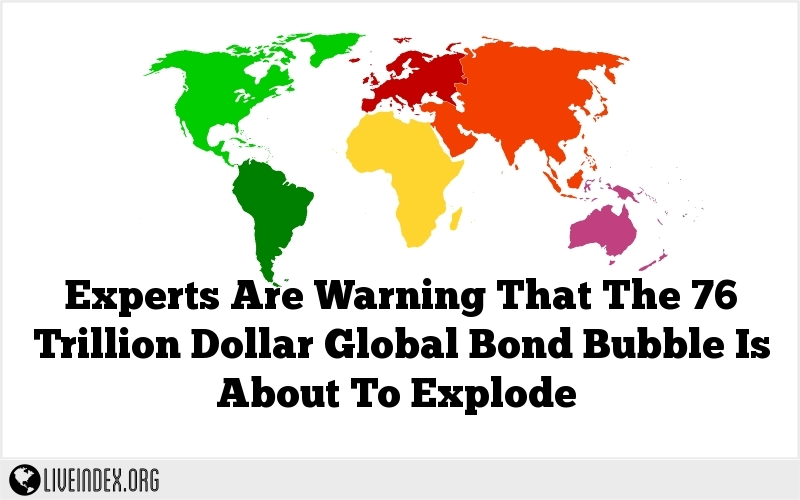 Warren Buffett believes “that bonds are very overvalued“, and a recent survey of fund managers found that 80 percent of them are convinced that bonds have become “badly overvalued“.  The most famous bond expert on the planet, Bill Gross, recently confessed that he has a sense that the 35 year bull market in bonds is “ending” and he admitted that he is feeling “great unrest”.  Nobel Prize–winning economist Robert Shiller has added a new chapter to his bestselling book in which he argues that bond prices are “irrationally high”.  The global bond bubble has ballooned to more than 76 trillion dollars, and interest rates have never been lower in modern history.  In fact, 25 percent of all government bonds in Europe actually have a negative rate of return at this point.  There is literally nowhere for the bond market to go except for the other direction, and when this bull market turns into a bear it will create chaos and financial devastation all over the planet.

In a recent piece entitled “A Sense Of Ending“, bond guru Bill Gross admitted that the 35 year bull market in bonds that has made him and those that have invested with him so wealthy is now coming to an end…

Stanley Druckenmiller, George Soros, Ray Dalio, Jeremy Grantham, among others warn investors that our 35 year investment supercycle may be exhausted. They don’t necessarily counsel heading for the hills, or liquidating assets for cash, but they do speak to low future returns and the increasingly fat tail possibilities of a “bang” at some future date. To them, (and myself) the current bull market is not 35 years old, but twice that in human terms. Surely they and other gurus are looking through their research papers to help predict future financial “obits”, although uncertain of the announcement date. Savor this Bull market moment, they seem to be saying in unison. It will not come again for any of us; unrest lies ahead and low asset returns. Perhaps great unrest, if there is a bubble popping.

And the way that he ended his piece sounds rather ominous…

I wish to still be active in say 2020 to see how this ends. As it is, in 2015, I merely have a sense of an ending, a secular bull market ending with a whimper, not a bang. But if so, like death, only the timing is in doubt. Because of this sense, however, I have unrest, increasingly a great unrest. You should as well.

Bill Gross is someone that knows what he is talking about.  I would consider his words very carefully.

Another renowned financial expert, Yale professor Robert Shiller, warned us about the stock bubble in 2000 and about the real estate bubble in 2005.  Now, he is warning about the danger posed by this bond bubble…

In the first edition of his landmark book “Irrational Exuberance,” published in 2000, the Yale professor of economics and 2013 Nobel Laureate presciently warned that stocks looked especially expensive. In the second edition, published in 2005 shortly before the real estate bubble crashed, he added a chapter about real estate valuations. And in the new edition, due out later this month, Shiller adds a fresh chapter called “The Bond Market in Historical Perspective,” in which he worries that bond prices might be irrationally high.

For years, ultra-low interest rates have enabled governments around the world to go on a debt binge unlike anything the world has ever seen.  Showing very little restraint since the last financial crisis, they have piled up debts that are exceedingly dangerous.  If interest rates were to return to historical norms, it would instantly create the greatest government debt crisis in history.

1) governments are unable to eliminate deficits

4) Global growth is declining despite money printing and bailouts And, we’ve saved the latest and greatest fact for last: as stunning as 0% interest rates sound, the mathematically-challenged-fantasyland called Europe has just one upped everyone by introducing NEGATIVE INTEREST RATES.

As of writing, over 25% of all bonds issued by European governments has a guaranteed negative return for investors.

Germany can borrow money for 5 years at an interest rate of NEGATIVE 0.10%. Yes, instead of Germany paying you interest when you lend them money, you have to pay them interest.

These same negative interest rate conditions exist across many of the Eurozone countries, as well as Denmark, Sweden and Switzerland.

Why in the world would you pay someone to borrow money from you?

It doesn’t make any sense at all, and this irrational state of affairs will not last for too much longer.

Anyone who holds the view that the Fed will not soon raise interest rates,and soon, fails to understand the nature of the developing crisis. It will be led by a collapse of the bond market.

I am not as bearish in the short-term on the stock market. The equity markets will be volatile because of the climb in rates and look scary at times but the death spiral will be in the bond market.

As this death spiral accelerates, we are going to see global interest rates rise dramatically.  And considering the fact that more than 400 trillion dollars in derivatives are directly tied to interest rates, that is a very scary thing.

And in case you are wondering, the stock market will be deeply affected by all of this as well.  I believe that we are going to witness a stock market crash even greater than what we experienced in 2008, and other experts are projecting similar things.  For example, just consider what Marc Faber recently told CNBC…

“For the last two years, I’ve been thinking that U.S. stocks are due for a correction,” Faber said Wednesday on CNBC’s “Trading Nation.” “But I always say a bubble is a bubble, and if there’s no correction, the market will go up, and one day it will go down, big time.”

“The market is in a position where it’s not just going to be a 10 percent correction. Maybe it first goes up a bit further, but when it comes, it will be 30 percent or 40 percent minimum!” Faber asserted.

Where we are right now is at the end of the party.  There are some that want to keep on dancing to the music for as long as possible, but most can see that things are winding down and people are starting to head for the exits.

The irrational global financial bubble that investors have been enjoying for the past few years has stretched on far longer than it should have.  But that is the way irrational bubbles work – they just keep going even when everyone can see that they have become absolutely absurd.  However, eventually something always comes along and bursts them, and once that happens markets can crash very, very rapidly.