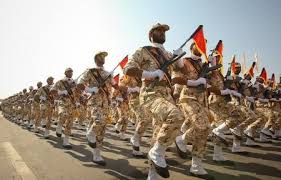 The action by Trump, who has taken a hard line toward Iran by withdrawing from the 2015 Iran nuclear deal and re-imposing broad economic sanctions, marks the first time the United States has formally labelled another nation’s military a terrorist group.

The council also called the move against the Islamic Revolutionary Guard Corps (IRGC), Iran’s most powerful security organization, “unwise and illegal” and “a major threat” to regional and international stability and peace.

“The IRGC is the Iranian government’s primary means of directing and implementing its global terrorist campaign,” Trump said in a statement.

Senior U.S. military commanders share Trump’s concerns about Iran and the IRGC but long opposed the designation due to concern over a potential backlash against U.S. forces in the Middle East and the problems It could create for U.S. partners who have a relationship with Iran, U.S. officials say.

The Pentagon declined to discuss what the U.S. military was doing to protect American troops from any retaliation by the IRGC or Iran-aligned militia in places like Iraq.

U.S. officials, speaking on condition of anonymity, said the U.S. military was taking all necessary steps and had alerted its commanders prior to the announcement.

Critics said Trump’s decision was largely symbolic because the IRGC and Iran already are subject to stiff U.S. sanctions and they said it could expose U.S. forces to attack.

Jason Blazakis, a former State Department official who oversaw the process for labelling foreign terrorist organizations, said he believed the IRGC designation was done for purely symbolic and domestic political reasons that could have deadly consequences for U.S. troops.

He said it could prompt Qassem Soleimani, the powerful commander of the Quds Force, the IRGC’s elite foreign espionage and paramilitary contingent, to allow IRGC-controlled Shi’ite Muslim militias to retaliate against U.S. forces in Iraq.

“I imagine that tight leash he (Soleimani) has had on them (Shi’ite militias) will be less tight. He could call for them to take actions against U.S. assets in places like Baghdad’s Green Zone,” he continued, referring to the Iraqi capital’s diplomatic and governmental enclave.

The only “theoretical benefit” the designation could provide is to make it slightly easier for the Justice Department to prosecute people for providing “material support” to the IRGC, he said. The Department already has the authority for such prosecutions under an executive order signed by President George W. Bush after the Sept. 11, 2001, attacks by al Qaeda.

The IRGC is in charge of Iran’s ballistic missile and nuclear programs. Tehran has warned that it has missiles with a range of up to 2,000 km (1,242 miles), putting Israel and U.S. military bases in the region within reach.

The IRGC designation was warmly welcomed by Israeli Prime Minister Benjamin Netanyahu, who is up for reelection on Tuesday and who tweeted “Thank you, my dear friend, U.S. President Donald Trump… for meeting another of my important requests.”

Set up after Iran’s 1979 Islamic Revolution to protect the Shi’ite clerical ruling system, the Guards’ have a huge influence in Iran’s political system, controlling large swathes of the economy and the armed forces.

Their involvement in Iran’s banking and shipping industries could complicate matters with U.S. allies including the European Union. Those who do business with the Guards could now receive up to 20 years in prison and be barred from entering or doing business in the United States.

The Iranian currency weakened on Monday. The U.S. dollar to 143,000 rials on Monday night according to the website Mesghal.com, higher than Sunday’s rate of 138,000 rials.

The United States has already blacklisted dozens of entities and people for affiliations with the IRGC, but not the organization as a whole.

Secretary of State Mike Pompeo, a strident critic of Iran, has pushed for the change in U.S. policy as part of the Trump administration’s tough posture toward Tehran.

The U.S. action against the entire IRGC had been debated in the Trump administration for months as Washington sought additional ways to pressure Iran and curtail its influence in Syria, Iraq and Yemen.

“This designation is a direct response to an outlaw regime and should surprise no one,” Pompeo said.

In 2017, IRGC commander Mohammad Ali Jafari warned that if Trump went ahead with designating the group as terrorist “then the Revolutionary Guards will consider the American army to be like Islamic State all around the world.”

Such threats are particularly ominous for U.S. forces in places such as Iraq, where Iran-aligned Shi’ite militia are located close to U.S. troops.

The State Department said on Monday the IRGC has been engaged in terrorist activity since its inception, including the 1996 Khobar Towers bombing in Saudi Arabia that killed 19 Americans, and a foiled plan to attack the Saudi ambassador to the United States on U.S. soil.

Previous administrations have considered expanding the designation to the entire group, but decided that the risk to U.S. forces overseas was too great, according to former U.S. officials.