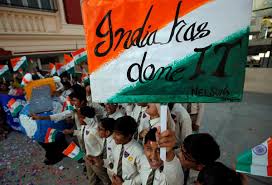 India shot down one of its satellites in space with an anti-satellite missile on Wednesday, Prime Minister Narendra Modi said, hailing the country’s first test of such technology as a major breakthrough that establishes it as a space power.

India would only be the fourth country to have used such an anti-satellite weapon after the United States, Russia and China, said Modi, who heads into general election next month.

“Our scientists shot down a live satellite 300 kilometres away in space, in low-earth orbit,” Modi said in a television broadcast.

“India has made an unprecedented achievement today,” he added, speaking in Hindi. “India registered its name as a space power.”

Anti-satellite weapons permit attacks on enemy satellites, blinding them or disrupting communications, as well as providing a technology base to intercept ballistic missiles.

Such capabilities have raised fears of the weaponisation of space and setting off a race between rivals.

After the news, China’s foreign ministry said it hoped all countries “can earnestly protect lasting peace and tranquility in space”. The United States and Russia both declined to make any immediate comment.

India’s neighbour and arch-rival Pakistan said space is the “common heritage of mankind and every nation has the responsibility to avoid actions which can lead to the militarization of this arena.”

Tension flared last month between the nuclear-armed foes after a militant attack in the disputed region of Kashmir. Separately, Pakistan announced on Wednesday it had studied an Indian government report into the Kashmir incident and summoned India’s High Commissioner to Islamabad to share the conclusions, adding that it was seeking further information and was acting in the interest of regional peace and security.

India has had a space programme for years, making earth imaging satellites and launch capabilities as a cheaper alternative to Western programmes. It sent a low-cost probe to Mars in 2014 and plans its first manned space mission by 2022.

The latest test, conducted from an island off its east coast, was aimed at protecting India’s assets in space against foreign attacks, the government said.

A ballistic missile defence interceptor produced by the government’s Defence Research and Development Organisation was used to shoot down the satellite, the foreign ministry said.

“The capability achieved…provides credible deterrence against threats to our growing space-based assets from long-range missiles, and proliferation in the types and numbers of missiles,” it said in a statement.

The three-minute test in the lower atmosphere ensured there was no debris in space and the remnants would “decay and fall back on to the earth within weeks”, the ministry added.

But Jeffrey Lewis of the Middlebury Institute of International Studies at Monterey said the risk of debris hitting other objects in space remained.

“One of the big risks of a hit-to-kill ASAT (anti satellite weapon) is that it shatters the target, leaving a cloud of lethal debris that threatens other satellites. In an extreme scenario, there is even a risk of ‘collisional cascading’ in which one breakup triggers others in a chain reaction.”

“While tests can be arranged to minimize this risk, any operational use of such a system in war poses a real threat to all satellites in orbit at similar altitude.”

China destroyed a satellite in 2007, creating the largest orbital debris cloud in history, with more than 3,000 objects, according to the Secure World Foundation.

“Space is being turned into a battlefront, making counter-space capabilities critical. In this light, India’s successful ‘kill’ with an ASAT weapon is significant.”

A spokeswoman for the U.S. mission in Geneva, which handles disarmament issues, had no immediate comment on the Indian test.

The United States ran the first anti-satellite test in 1959, when satellites themselves were rare and new.

In the 1960s and early 1970s, the Soviet Union tested a weapon that would be launched into orbit, approach enemy satellites and destroy them with an explosive charge, according to the Union of Concerned Scientists.

There were no tests for more than 20 years, until China entered the anti-satellite arena in 2007.

Although he faces criticism for failing to deliver on high economic growth and create jobs, a hawkish position on security should help Modi at the ballot box, pollsters say.

The leader of the main opposition Congress party, Rahul Gandhi, congratulated defence scientists but took a dig at Modi for the announcement on a day that commemorates theatricals.

“I would also like to wish the prime minister a very happy World Theatre Day,” Gandhi said. School children held flags in the western Indian city of Ahmedabad celebrating the test.

A concern for India is that China could help its old ally Pakistan neutralise any advantage.

“Pakistan and China have a very deep strategic kind of partnership. So some kind of sharing of capabilities can’t be ignored,” Uday Bhaskar, director of the Society for Policy Studies, another Delhi think-tank, said.