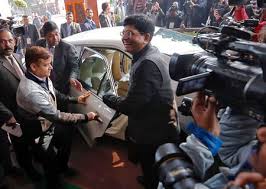 India’s government pledged 750 billion rupees ($ 10.56 billion) to support poor farmers and reduced the tax burden for the middle class on Friday, as it looked to rally support from voters with the final budget before a general election.

Heading into polls that must be held by May, Prime Minister Narendra Modi is facing discontent over depressed farm incomes and doubts over whether his policies are creating enough jobs.

And with opinion polls suggesting that the ruling Bharatiya Janata Party (BJP) could lose its parliamentary majority, the government delivered a budget to shore up support in the countryside, where two-thirds of Indians live, and among the urban, salary-earning middle class.

The interim budget for 2019/2020 offered direct cash support of 6,000 rupees to 120 million poor farmers and allocated more funds for a rural jobs guarantee scheme and rural development, like building roads and homes.

Vying with an opposition that has also trumpeted budget-straining populist measures to support from poorer voters, the government said it would launch a pension scheme for workers in the unorganised sector, which employs some 420 million people.

The budget proposals also reduced the burden for the lower middle class, by exempting people earning up to 500,000 rupees from income tax from an earlier cap of 250,000 rupees.

Still, the measures announced on Friday were aimed at putting money into pockets quickly.

“This is not just an interim budget, this is a vehicle for the developmental transformation of the nation,” Acting Finance Minister Piyush Goyal told the lower house of parliament, as BJP lawmakers thumped their desks and chanted “Modi, Modi”.

“India is solidly back on track and marching towards growth and prosperity,” said Goyal, who delivered the budget in place of Finance Minister Arun Jaitley, who was in the United States for medical treatment.

India was expected to expand 7.2 percent this fiscal year, Goyal said, keeping its slot as one of the world’s fastest growing major economies.

But a report in the Business Standard daily the previous day belied the government bullishness over the economy. It said that the government has been withholding an official survey that showed India’s unemployment rate at its highest in decades.

“The budget is clearly farm-focused, with the elections in mind,” Kapoor said.

The interim budget for 2019/20 allocated 600 billion rupees for a rural jobs programme and 190 billion for building of roads in the countryside.

The big giveaways resulted in fiscal slippage, for a government that has been seeking to drag down its deficit.

The budget would put the fiscal deficit for the year ending on March 31 at 3.4 percent of gross domestic product (GDP), slightly higher than the targeted 3.3 percent.

Goyal set a deficit target of 3.4 percent for 2019/20, instead of the earlier target of 3.1 percent, but he went onto project the deficit would come down to 3 percent in both of the following two years.

“Overall, the government presented an expansionary budget and prioritised populism over fiscal prudence,” analysts at investment bank Nomura said in a note, calling it an election budget.

But Fang said the budget announcements did not change the rating agency’s stance on India. Moody’s rates India at “Baa2” with a “stable” outlook.

Analysts were skeptical about the government’s ability to even meet its upwardly revised fiscal deficit targets for the ongoing and upcoming fiscal year, noting that the government’s revenue projections, especially from the goods and services tax (GST) seem optimistic.

“Their revenue estimates seem to be optimistic, particularly on the GST front, which the government is budgeting at about 18 percent growth rate,” said Shashank Mendiratta an economist with IBM in New Delhi, adding that forecast looked “very aggressive.”

India’s bond yields spiked amid worries over the fiscal slippage and the government’s borrowing plans. The benchmark 10-year bond yield rose 14 basis points to 7.62 percent, while the rupee traded at 71.26 against the U.S. dollar, about 17 paisa weaker than its close on Thursday.

The country’s stock markets gained, however, on expectations that the budget would boost consumption. The broader NSE index closed up 0.6 percent at 10893.65.