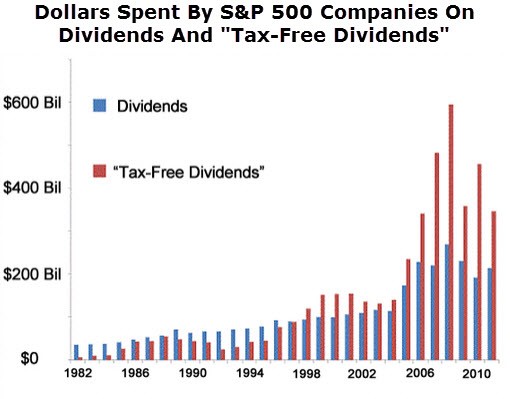 Beat The Market With ‘Tax-Free Dividends’

Top companies are shelling out these extra payments in droves. The goal is to give shareholders more bang for their investment buck than dividends alone. They are a favorite of Warren Buffett and many other billionaire investors.

There’s a good chance you’ve received one of these “tax-free dividends” before and didn’t even realize it. That’s because they’re buried in a company’s financial statement.

But since 1982, when the SEC enacted a rule called 10b-18 as a measure of boosting the economy, these “tax-free dividends” have become a favored form of payment among shareholders.

And companies have responded. Just look at the chart below to see how companies have been paying shareholders since 1982, especially since 2005 (hint: it hasn’t been just with traditional dividends)…

It was an awful time for the U.S. economy. We were in a recession, and still suffering from the aftershocks of gas rationing and oil shortages of the 1970s. Loans had interest rates over 16%.

So in order to kick-start the economy, the SEC implemented an ingenious rule called 10b-18.

This law provided “safe harbor” for companies that repurchased their own stock. In other words, companies were free to purchase as much of their own stock without the SEC claiming they were trying to manipulate the price.

You may be familiar with share buybacks, but I bet you haven’t been told how much they can actually help investors… and how when combined with traditional dividends, they can crush the market over time.

A buyback makes every share you own worth a larger piece of the company pie. It’s a wealth transfer from the company to you, just like a dividend.

As an example, let’s imagine you invest in a company that has issued 1 billion shares. The company earned $ 1 billion last year, meaning it earned $ 1 per share.

Now let’s imagine that the company bought back half its shares — 500 million. All of a sudden, your claim on the company’s earnings per share essentially doubles to $ 2 per share — all without you having to do a thing.

Many have started to realize that buybacks are in many ways another dividend payment.

The CEO of Epoch Investing, William Priest, said in a 2009 paper that buybacks “are essentially dividends” and are “a clear method for value creation.”

And way back in 1984, shortly after SEC ruling 10b-18 made buybacks more popular, Warren Buffett said:

“When companies with outstanding businesses and comfortable financial positions find their shares selling far below intrinsic value in the marketplace, no alternative action can benefit shareholders as surely as repurchases.”

Another fund manager, Mebane Faber, has said much the same thing… and gone even further. In 2012 he said that buybacks can be even better than dividends thanks to their tax treatment:

“Buybacks and dividends are basically the same thing mathematically speaking, but buybacks have a little better tax treatment than dividends.”

How do they get better tax treatment?

Given the preferential tax treatment, I like to think of share buybacks as “Tax-Free Dividends.” As stated above, it’s like a tax-free money transfer to shareholders. Not only that, but it’s proven to boost share prices over time.

As evidence, just look at the Powershares Buyback Achievers ETF (NYSE: PKW). This exchange-traded fund holds all the top buyback companies in its portfolio. 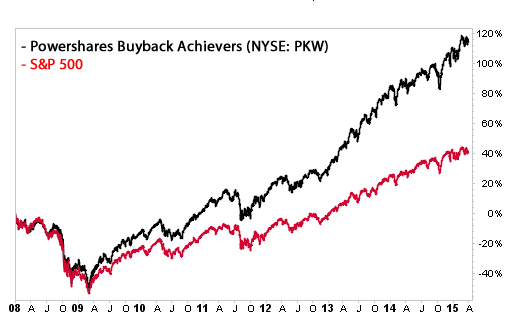 Let’s take a look at an example of how this works for an individual company — like Home Depot (NYSE: HD), the world’s largest home-improvement store and one of the strongest-performing stocks I’ve seen in recent times.

Home Depot stock pays a modest 2% dividend yield and has steadily increased its revenue 17% since 2009 — which is great, but that’s not what makes it special.

What’s made this dividend stock so successful is its buybacks. Over the past 5 years, it’s returned more than $ 20 billion in the form of share buybacks — on top of the $ 9.7 billion paid in regular dividends. 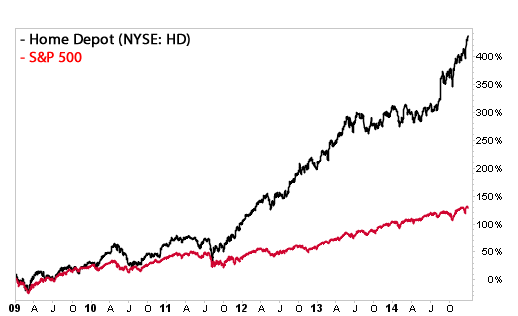 Now, Home Depot isn’t the highest-yielding dividend stock out there, but what’s important is this: no matter what kind of dividend stock you choose to invest in, choosing a company that buys back its own stock over one that doesn’t could mean the difference between market-beating returns and merely keeping pace with the crowd.

My latest research backs that up. I’ve found a special group of stocks that not only pay dividends, but buy back stock and give their shareholders yet another form of extra payment that prevents them from heavy losses in market downturns.

Because these stocks carry more than just dividend yields, we call them “Total Yield” stocks. Twice a month, I tell readers about the highest Total Yielders on the market, many of which reach the high double-digits.

Simply put, if you’re not looking at the other ways a company rewards its shareholders, you’re not going to maximize your total returns. To learn more about my Total Yield strategy, I invite you to check out this free presentation.