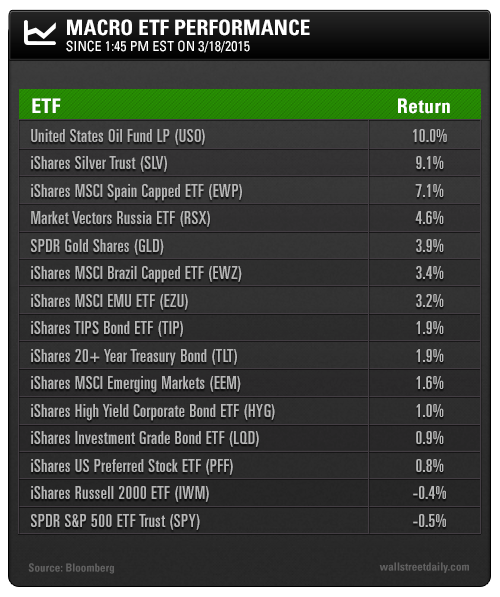 How to Play Economic Climate Change

Scientists believe that there have been at least five major ice ages in the Earth’s past, based on geological data and climate cycle analyses.

So how much data will it take for economists to embrace the notion that we’re in an Economic Ice Age?

Using faulty models and linear extrapolation techniques, the so-called “dismal science” of economics has been slow to accept the possibility of secular stagnation.

But another round of abysmal economic data has made it abundantly clear that the economy is frozen in place.

As the market action over the past few weeks shows, economic climate change has profound implications for traders and investors alike…

On March 18, the Federal Reserve significantly downgraded economic growth and inflation expectations. The market ultimately sensed a lack of urgency with respect to the first interest rate hike, as well as a lack of conviction regarding the pace of rate increases.

As a result of the “dovish” interpretation of the Fed statement, the U.S. Dollar Index has backed off of the 100 level. Since then, a series of generally atrocious economic data releases has exacerbated the dollar’s weakness.

The three-month moving average of the Chicago Fed National Activity Index, representing a blend of 85 monthly indicators, reached its lowest level in a year.

Yesterday, we found out that durable goods orders unexpectedly tumbled 1.4% in February.

Meanwhile, the market’s reaction, especially in precious metals, has been interesting over the past week. The table below shows various exchange-traded fund (ETF) returns – serving as proxies for macro movements – since just before the Fed announcement at 2 p.m. on March 18:

As you can see, commodities were some of the big winners over the past week.

Crude oil has posted a surprisingly strong performance in light of continued worries about a supply glut and potential lack of storage. The United States Oil Fund LP (USO) has risen 10% since the Fed announcement. However, this move likely has more to do with market positioning and ultra-bearish sentiment rather than a trend change.

The iShares MSCI EMU ETF (EZU), a eurozone ETF, has handily outperformed the S&P 500 on the back of a stronger euro.

Treasuries have also been well bid, and rates have fallen along the entire yield curve. The iShares 20+ Year Treasury Bond (TLT) has risen 1.9%. With inflation expectations arresting their fall, demand was boosted for Treasury inflation-protected securities (TIPS), as well.

In the U.S. equity markets, sector performance has been a mixed bag: 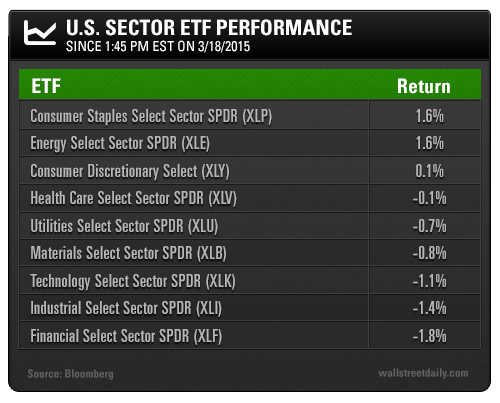 The defensive Consumer Staples Select Sector SPDR (XLP) is leading the way. The large multinationals in this group with significant overseas exposure have benefited from the weaker dollar. 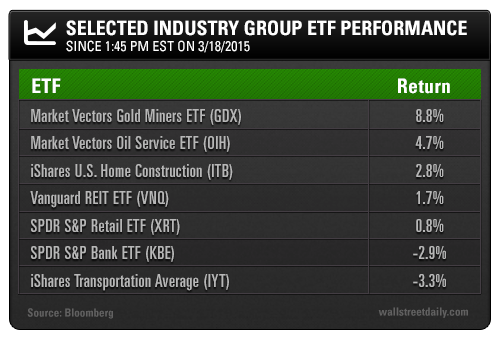 The Market Vectors Gold Miners ETF (GDX) has been flying, although from a depressed level. A weaker dollar and relatively low oil prices would be ideal for this group.

The Fed’s message is really a relief for housing market, which would be negatively impacted by higher rates. The iShares U.S. Home Construction (ITB) is up 2.8% since the Fed release, continuing its strong year-to-date performance.

Conversely, transports are down for the year and have continued to struggle this past week, with the iShares Transportation Average(IYT) down 3.3%.

Commercial banks have also been one of the weakest industry groups in the past week, with the SPDR S&P Bank ETF (KBE) down nearly 3%. The yield curve is still relatively flat, and that will likely continue. Basically, that means banks have less opportunity to profit since the spread between short-term borrowing costs and long-term lending rates are narrow.

Unfortunately, leadership by the transports and financials is typically seen as healthy for the broader market, so their weak performances are a bit troubling.

Will the past week’s movements in currencies and financial assets prove fleeting? Only time will tell. Regardless, traders can take note of the market action depicted in the tables above and devise a plan for further U.S. economic data weakness and related dollar selling.

Like I said in December, there are significant downside risks to economic growth… and my far-from-consensus view is already proving credible.

For those who are bewildered, surprised, or frustrated with the market gyrations we’ve been experiencing, I urge you to consider this: Investors with broadly diversified portfolios have performed very well (with much less stress) in this shifting market.