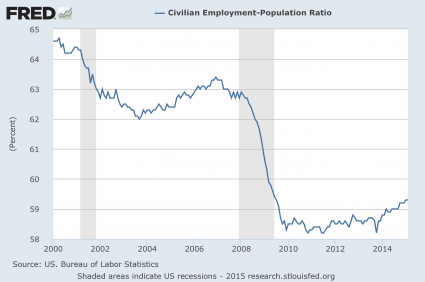 10 Reasons Why The Unemployment Numbers Are A Massive Lie

On Friday, we learned that the official “unemployment rate” has fallen to 5.5 percent. Since an unemployment rate of 5 percent is considered to be “full employment” by many economists, many in the mainstream media took this as a sign that the U.S. economy has almost fully “recovered” since the last recession.  In fact, according to the Wall Street Journal, some Federal Reserve officials believe that “the U.S. economy is already at full employment“.  But how can this possibly be?  It certainly does not square with reality.  Personally, I know people that have been struggling with unemployment for years and that still cannot find a decent job.  And I get emails from readers all the time that are heartbroken because they are suffering through extended periods of unemployment.  So what in the world is going on?  How can the government be telling us that we are nearly at “full employment” when so many people can’t find work?  Could it be possible that the government numbers are misleading?

It is my contention that the official “unemployment rate” has become so politicized and so manipulated that it is essentially meaningless at this point.  The following are 10 reasons why…

#2 The percentage of working age Americans that have a job right now is still about the same as it was during the depths of the last recession.  Posted below is a chart that shows how the employment-population ratio has changed since the beginning of the decade.  Does this look like a full-blown “employment recovery” to you?…

#3 The primary reason for the decline in the official “unemployment rate” is the fact that the government now considers millions upon millions of long-term unemployed workers to “no longer be in the labor force”.  Just check out the following numbers…

When President Obama took over the office in January 2009, nearly 80,529,000 Americans were not a part of the labor force. The number has increase by nearly 12 million over the last few years.

#4 Over the past couple of years, the labor force participation rate in this country has been hovering near mutli-decade lows…

The labor force participation rate hovered between 62.9 percent and 62.7 percent in the eleven months from April 2014 through February, and has been 62.9 percent or lower in 13 of the 17 months since October 2013.

#5 When you add the number of “officially unemployed” Americans (8.7 million) to the number of Americans “not in the labor force” (92.9 million), you get a grand total of 101.6 million working age Americans that do not have a job right now.  Does that sound like “full employment” to you?

#6 The quality of our jobs continues to decline.  Right now, only 44 percent of U.S. adults are employed for 30 or more hours each week.

#7 Millions upon millions of Americans have been forced to take part-time jobs because that is all they can find, and wages for American workers are at depressingly low levels.  The following numbers come directly from the Social Security Administration…

#8 The average duration of unemployment for an unemployed worker is still about twice as long as it was just prior to the last recession.

#9 Most Americans feel as though the Obama administration has done little to nothing to help the middle class.  Just consider the following poll numbers…

According to a new poll by the Pew Research Center, Americans see government policies under the Obama administration as having mostly benefited wealthy people, large corporations and financial institutions.

#10 If the unemployment rate was calculated honestly, we would all be talking about the horrific “unemployment crisis” that we were currently enduring.  According to John Williams of shadowstats.com, the real unemployment rate in the United States right now is above 23 percent.

Our politicians and the mainstream media are attempting to convince us that everything is just fine.

But what they are telling us simply does not match the cold, hard reality on the streets.

And since the talking heads on television are proclaiming that we are nearly at “full employment”, that just makes millions upon millions of Americans that can’t seem to find work no matter how hard they try feel even worse than they already do.

If jobs are “easy to get”, then those that are chronically unemployment must have “something wrong” with them.  That is the message that we are being given.  If the mainstream media says that unemployment has gone way down, then anyone that is still unemployed must be really “lazy”, right?

When you are unemployed for an extended period of time, it can really suck the life right out of you.  It can be really tempting to believe that you are viewed as a failure by your family and friends.  And for the government to lie to us like this just makes things even harder.

If you are unemployed and can’t find a job right now, I want you to understand that you are caught in the midst of a long-term downward economic spiral which is going to get a lot worse.

When the government tells you that we are in a “recovery”, they are lying to you.

And when the government tells you that things are about to get a lot better, they are lying to you.

Everyone has times in their lives when they get knocked down.

The key is to always get back up and to never, ever stop fighting.

Yes, we are facing some really hard economic times.  But that does not mean that your life is over.  Never give up, and never give in to fear.  Just do what you can with what you have today, and tomorrow get up and fight with everything that you have got.

The truth is that the best chapters of your life could be just around the corner.