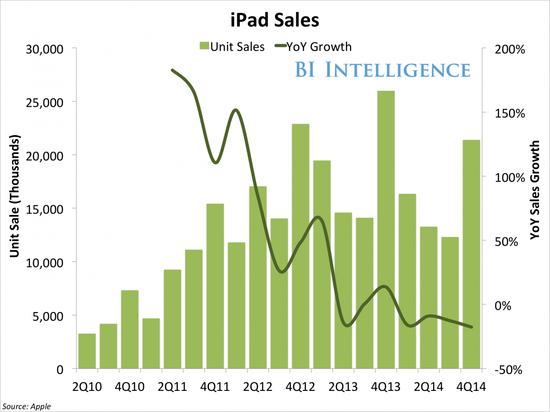 Apple Set To Dominate Again In 2015

Apple Inc. (AAPL) enjoyed an extraordinary year in 2014, as the stock price climbed more than 70% over the past year. The surging stock price has been driven by incredible sales of its newest iPhone, as the company sold over 74 million units last quarter. Apple made $ 18 billion in profit that quarter, more than any company had in corporate history.

With so much growth over the past year, investors understandably might believe that the company has saturated the smartphone market and does not have much room left to grow. They are wrong, however, as Apple’s stock price will continue to rise in 2015. Continued success with the iPhone, a revamped iPad strategy and new products offer plenty of room for growth, while the stock is actually still priced relatively cheaply.

After selling 74.5 million iPhones in the last quarter, up 46% year over year, it makes sense that many believe that Apple can’t grow any further from here, or that sales could even begin to shrink. But there is still plenty of room for growth. For one, there is plenty of growth in foreign markets, such as China. Last quarter, they sold more smartphones there than any other company, jumping all the way from number six during the previous quarter. The company’s market share in China jumped from 9% to 17%.

Also, Apple CEO Tim Cook stated that less than 15% of iPhone buyers were upgrading from older iPhones, and that the majority of those who switched to iPhones had done so from a smartphone running Android. There are still currently a lot of people who own Android phones that will look to be upgrading in the future. With the iPhone 6 clearly the best phone in the market, it is safe to assume that more Android users will switch over.

The low percentage of iPhone users that have upgraded so far is another promising sign for the company. Apple currently has roughly 400 million iPhone users. With 74.5 million new iPhones sold last year and only 15% of those already having iPhones, which means there are well over 300 million iPhone users who will upgrade their phones. Apple customers are extremely loyal, and are unlikely to switch to an inferior product now that the iPhone 6 has become so popular.

Some additional promising points for Apple’s iPhone sales is there are a lot of people who still don’t have smartphones and smartphone users are now upgrading their phones more often than ever. In the last quarter, Apple had the highest number of new users ever, and the iPhone is the clear choice for people looking to buy their first smartphone. At the same time, mobile providers have begun offering deals to existing customers so they can more frequently and affordably upgrade their phones. Add all these points together, and Apple appears set to enjoy massive iPhone sales again this year.

iPad sales saw their largest year-over-year decline ever last quarter, even as the company recorded record profits. Compared to a year earlier, sales were down 18% from a year earlier. The iPad sales were concerning, as sales have been steadily decreasing for a few years now. Cook remained upbeat about the iPad’s future prospects during the company’s most recent earnings call.

Apple is currently focused on getting iPads deployed to enterprise workforces. The tablets are already being used by most enterprises, according to Cook, but the enterprises are only distributing them to a small percentage of workers. To address this problem, Apple has partnered with IBM (IBM) to build more apps for specific uses. A couple of examples are a flight planning app for airlines and a customer-service app for insurance companies.

With the first ten apps that were released last year focusing on specific industries, or vertical solutions, the two companies are now focusing on more horizontal apps that any business could use. The partners plan to release 12 new apps during the current quarter and to have over 100 by the end of 2015. More than 130 companies are working with IBM to empower their employees with solutions on the iPad, and the list continues to grow.

Along with the wildly successful partnership with IBM, Apple is also making a new iPad with a 12-inch screen. It may come with a stylus, making it similar to Microsoft’s (MSFT) Surface Pro 3. The larger screens will make use of the tablets easier in the enterprise market, especially as Apple integrates its iOS software and Mac software more tightly than ever. While the product might be considered similar to the Surface Pro 3, people said the same thing about the iPhone 6 and some Samsung (SSNLF) phones that had larger screens, and that obviously worked out well for Apple.

Apple will be shipping the Apple Watch for the first time in April of this year. Currently, only about 6% of people own a wearable, according to Morgan Stanley (MIDZ), as there has yet to be a breakout hit. If any company were to be able to make a wearable device a hit, it would be Apple.

These devices will not have a huge impact on the company’s profits in the first year, but they will be important for the company for other reasons. For one, the Apple Watch will be a big step for the company in the post-Steve Jobs era. The device is the first new product launch since the former CEO passed away, and it marks a significant milestone for the company under Cook. It will also drum up enormous excitement around the company, as advertisements and celebrity endorsements will be ever present when the Apple Watch hits the market.

Besides that, they will enhance Apple’s ability to be present in all facets of peoples’ everyday lives. Apple is in the home, the job, the car, and now it will be on people everywhere they go. Apps for things such as fitness will be able to update people throughout the day and may even have the ability to change people’s habits. Working with a connection through users’ iPhone, the Apple Watch will be able to monitor things such as weight, exercise and heartbeat. These features will make Apple a part of people’s daily routine.

Apple Passbook will also continue to become a part of peoples’ everyday lives in 2015, including Apple Pay. Introduced in iOS 6, Apple Passbook is a home screen app that acts as a single repository for all the movie and sport tickets, loyalty and payment cards, boarding passes, coupons and other passes generated by all the compatible apps on the iPhone. The key for this becoming successful is wide acceptance, and Apple appears well on its way. More and more banks are adding Apple Pay services, and companies like Southwest Airlines (LUV) are updating its smartphone apps to include boarding passes and other similar things in the Apple Passbook.

Besides the Apple Watch and Apple Pay, the company also is rumored to be coming out with its own music streaming service to compete with companies like Spotify through its purchase of Beats by Dre. There is also the recent reports that the company is exploring the possibility of making its own car and constant rumors of the company’s television efforts, meaning 2015 is sure to be an exciting time for Apple.

Even though the company’s stock soared last year, one could easily make the case that the stock is still not properly valued. A price-to-earnings (P/E) ratio is a valuation ratio of a company’s current share price compared to its per-share earnings. Apple’s forward P/E ratio is just above 15.25, which is pretty low for a tech company with so much growth potential and its market position. Google (GOOG), for example, has a P/E ratio of almost 24. Apple’s low P/E ratio would be lower if it were not for all the cash it has, roughly $ 178 billion.

The company’s low valuation is because investors believe that a company its size can’t grow as fast as smaller tech companies. But Apple has proven for close to 10 years that it is the best company at creating exciting technologies that people want to buy. Add in that the company is likely to increase its dividend in the close future and its desire to purchase back a large percentage of its stock, and it becomes clear that the stock remains undervalued and will only continue to rise.

I Know First supplies financial services, mainly through stock forecasts via its predictive algorithm. The algorithm incorporates a 15-year database and utilizes it to predict the flow of money across 2,000 markets. The algorithm has more data to forecast within the long term and, naturally, outputs a more accurate predication in that time frame. Having said that, intraday traders, along with short-term players, will also benefit by taking the algorithmic perspective into consideration.

In this forecast, Apple had a signal strength of 1.83 and a predictability indicator of 0.3 for the one-year time horizon. In accordance with the algorithm’s prediction, the stock price increased 73.89% over that time. 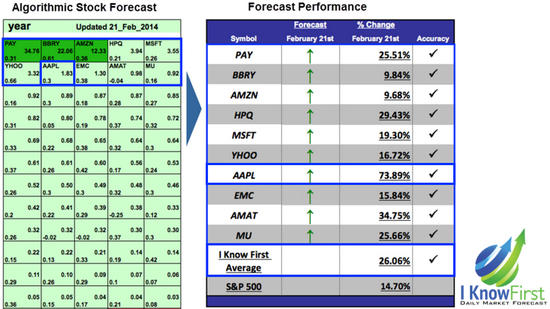 Having demonstrated how I Know First’s algorithm was able to correctly predict the movement of Apple’s stock price earlier in the article, it is worthwhile to see if the algorithm agrees with the bullish fundamental analysis of the company. Figure 3 includes the three-month and one-year forecasts for Apple from February 25, 2015. In both forecasts, Apple has a positive signal, indicating the algorithm is bullish for the stock.