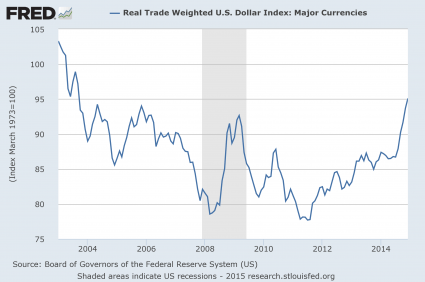 Guess What Happened The Last Time The U.S. Dollar Skyrocketed In Value Like This?…

Over the past decade, there has been only one other time when the value of the U.S. dollar has increased by so much in such a short period of time.  That was in mid-2008 – just before the greatest financial crash since the Great Depression.  A surging U.S. dollar also greatly contributed to the Latin American debt crisis of the early 1980s and the Asian financial crisis of 1997.  Today, the globe is more interconnected than ever.  Most global trade is conducted in U.S. dollars, and much of the borrowing done by emerging markets all over the planet is denominated in U.S. dollars.  When the U.S. dollar goes up dramatically, this can put a tremendous amount of financial stress on economies all around the world.  It also has the potential to greatly threaten the stability of the 65 trillion dollars in derivatives that are directly tied to the value of the U.S. dollar.  The global financial system is more vulnerable to currency movements than ever before, and history tells us that when the U.S. dollar soars the global economy tends to experience a contraction.  So the fact that the U.S. dollar has been skyrocketing lately is a very, very bad sign.

But in the initial deflationary stage of the coming financial crisis, we are likely to see the U.S. dollar actually strengthen considerably.

As I have discussed so many times before, we are going to experience deflation first, and after that deflationary phase the desperate responses by the Federal Reserve and the U.S. government to that deflation will cause the inflationary panic that so many have written about.

This is what we witnessed in 2008, and this is happening once again right now.

At the moment, almost every major currency in the world is falling relative to the U.S. dollar.

For example, this next chart shows what the euro is doing relative to the dollar.  As you can see, the euro is in the midst of a stunning decline… 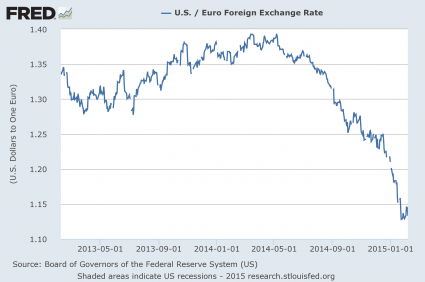 Instead of focusing on the U.S. dollar, those that are looking for a harbinger of the coming financial crisis should be watching the euro.  As I discussed yesterday, analysts are telling us that if Greece leaves the eurozone the EUR/USD could fall all the way down to 0.90.  If that happens, the chart above will soon resemble a waterfall.

And of course it isn’t just the euro that is plummeting.  The yen has been crashing as well.  The following chart was recently posted on the Crux… 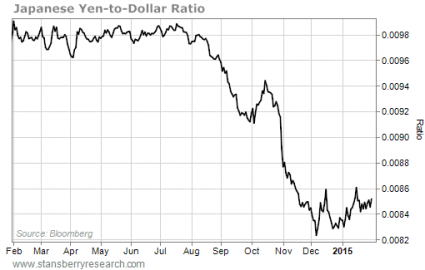 Unfortunately, most Americans have absolutely no idea how important all of this is.  In recent years, growing economies all over the world have borrowed gigantic piles of very cheap U.S. dollars.  But now they are faced with the prospect of repaying those debts and making interest payments using much more expensive U.S. dollars.

Investors are starting to get nervous.  At one time, investors couldn’t wait to pour money into emerging markets, but now this process is beginning to reverse.  If this turns into a panic, we are going to have one giant financial mess on our hands.

The truth is that the value of the U.S. dollar is of great importance to every nation on the face of the Earth.  The following comes from U.S. News & World Report…

In the early ’80s, a bullish U.S. dollar contributed to the Latin American debt crisis, and also impacted the Asian Tiger crisis in the late ’90s. Emerging markets typically have higher growth, but carry much higher risk to investors. When the economies are doing well, foreign investors will lend money to emerging market countries by purchasing their bonds.

They also deposit money in foreign banks, which facilitates higher lending. The reason for this is simple: Bond payments and interest rates in emerging markets are much higher than in the U.S. Why deposit cash in the U.S. and earn 0.25 percent, when you could earn 6 percent in Indonesia? With the dollar strengthening, the interest payments on any bond denominated in U.S. dollars becomes more expensive.

Additionally, the deposit in the Indonesian bank may still be earning 6 percent, but that is on Indonesian rupiahs. After converting the rupiahs to U.S. dollars, the extra interest doesn’t offset the loss from the exchange. As investors get nervous, the higher interest on emerging market debt and deposits becomes less alluring, and they flee to safety. It may start slowly, but history tells us it can quickly spiral out of control.

Over the past few months, I have been repeatedly stressing that so many of the signs that we witnessed just prior to previous financial crashes are happening again.

Now you can add the skyrocketing U.S. dollar to that list.

If you have not seen my previous articles where I have discussed these things, here are some places to get started…

“Guess What Happened The Last Time The Price Of Oil Crashed Like This?…”

“Not Just Oil: Guess What Happened The Last Time Commodity Prices Crashed Like This?…”

The warnings signs are really starting to pile up.

When we look back at past financial crashes, there are recognizable patterns that can be identified.

Anyone with half a brain should be able to see that a large number of those patterns are unfolding once again right before our eyes.

Unfortunately, most people in this world end up believing exactly what they want to believe.

No matter how much evidence you show them, they will not accept the truth until it is too late.