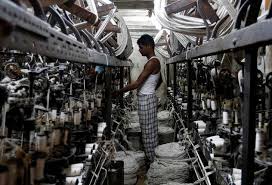 The Nikkei/IHS Markit Manufacturing Purchasing Managers’ Index fell to 47.9 in July from June’s 50.9, its first reading below the 50 mark that separates growth from contraction since December and its lowest reading since February 2009.

A Reuters poll predicted a modest July dip to 50.8. But July brought the biggest month-on-month decline since November 2008, just after the collapse of Lehman Brothers triggered a financial crisis and brought on a global recession.

An output sub-index fell to 46.3, its lowest since early 2009, from 51.7 in June, while contractions were reported across all major sub-indexes in the survey, including new orders, purchasing activity and employment.

“The introduction of the goods and services tax (GST) weighed heavily on the Indian manufacturing industry in July,” said Pollyanna De Lima, economist at IHS Markit.

“New orders and output decreased for the first time since the demonetisation-related downturn.”

On Nov. 8, Modi stunned the country by ordering the removal of 500-rupee and 1,000-rupee notes, which removed about 86 percent of the currency in circulation and put activity on the skids in a predominantly cash-reliant economy.

Another huge change in India has been implementation of a national GST, which took effect on July 1. While the near-term impact is expected to be negative, the economy should reap benefits in the medium to longer-term, many analysts say.

In July, a lack of clarity among producers on the new tax system hurt output even though factories cuts prices for their goods.

Even though input costs rose, firms cut prices to try and stimulate weak demand, suggesting retail inflation – which fell to a five-year low in June – is likely to remain subdued in coming months, adding pressure on the Reserve Bank of India to cut rates on Wednesday.