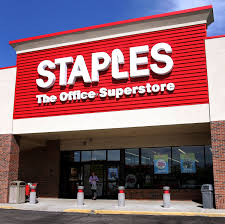 Staples on Verge of Being Bought for $6.5 Billion

Office supplies retailer Staples (spls) looks like it’s about to be bought by Sycamore Partners for $ 6.5 billion in what would be the biggest leveraged buyout of the year.

The private equity firm is set to pay at least $ 10 a share for Staples, the Wall Street Journal reported on Wednesday, citing unnamed sources. Reuters reported the price would be $ 10.25 and that the deal would be announced on Wednesday. A Staples spokesman did not immediately respond to a request from Fortune for comment.

The $ 6.5 billion is a fraction of what Staples was worth at its highest a decade ago, when its market cap was $ 19 billion. The price is a reflection of Staples’ dwindling fortunes in recent years as more and more office supplies retailing has moved online into the arms of Amazon.com (amzn). Staples’ annual sales came to $ 18.2 billion in its most recent fiscal year, compared to $ 25 billion five years earlier. And Staples’ continuing operations lost $ 459 million in 2016.

The chain has closed hundreds of stores in North America in recent years and a few months ago, Staples sold a majority stake in its European business to Cerberus Capital Management, a private equity firm. In the year that has passed since U.S. regulators thwarted its plan to buy Office Depot on antitrust concerns, Staples has, under CEO Shira Goodman, been trying to win more small business contracts (and rely less on Fortune 500 giants) and further beef up its e-commerce. That has included renting out office space to small businesses and individuals.

Sycamore Partners is a New York based private equity firm focused on retail and consumer investments. It has more than $ 3.5 billion in capital under management and its holdings include Belk department stores, Hot Top and Jones New York.