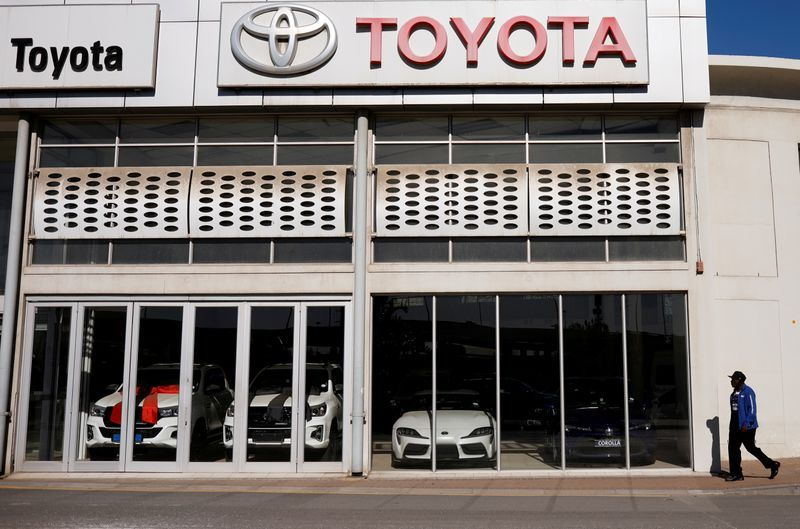 Japan’s Toyota Motor Corp announced a $2.3 billion share buyback on Wednesday and forecast annual profit will rise by 14% to pre-pandemic levels, as it shrugged off a coronavirus sales slump and a chip shortage that has hurt other car makers.

The world’s biggest automaker by vehicle sales expects renewed demand in the United States, its biggest market, to drive that recovery and forecast overall sales to grow 6.4% to 10.55 million vehicles for the year.

Toyota shares reversed course to rise 2.1% after the results on Wednesday, contrasting with a 10% tumble for smaller rival Nissan whose guidance disappointed investors.

Its shares were also lifted by the decision to buy back up to 1.46% of its shares worth 250 billion yen ($2.30 billion) and conduct a one-to-five share split.

CFO Kenta Kon said Toyota, famous for its just-in-time inventory management, has worked on improving its supply chain management to mitigate the impact of natural disasters following the Fukushima earthquake in 2011, and the efforts paid off.

“We are now able to make assessments of alternative products in a speedy matter. That is one of the factors of us being able to mitigate the impact of semiconductor supply shortages,” he told a media briefing.

Toyota surprised rivals and investors last quarter when it said its output would not be disrupted significantly by ongoing chip shortages even as Volkswagen, General Motors, Ford, Honda and Stellantis, among others, have been forced to slow or suspend some production.

The global auto industry has been grappling with that chip shortage since late last year, which was worsened in recent months by a fire at a chip plant in Japan and blackouts in Texas where a number of chipmakers have factories.

Toyota, the maker of the RAV4 SUV crossover and Prius hybrid vehicles, also said on Wednesday 8 million of its vehicles would be electrified annually by 2030, or around 80% of its current vehicle sales.

Toyota almost doubled its fourth-quarter operating profit to 689.8 billion yen, beating an estimate of 641.5 billion yen from 10 analysts compiled by Refinitiv. The profit was 369.9 billion yen in the same period a year earlier.

Its forecast of a 2.50 trillion yen profit for the year that began on April 1, however, was slightly lower than the 2.65 trillion yen average profit forecast from 24 analysts compiled by Refinitiv.

Nissan said on Tuesday it expects to break even this business year, defying expectations for a return to profitability, as the global chip shortage and commodity price hike curb the car maker’s recovery from a record annual operating loss.

Japan’s second-biggest automaker Honda, which is due to report annual results on Friday, said in February it expects a 520 billion yen profit for the year that ended in March.