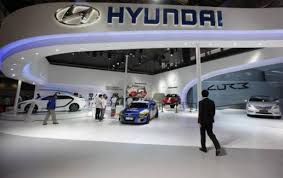 Hyundai Motor Co reported a 57% surge in quarterly profit on strong demand for its high-margin sports utility vehicles (SUVs) and premium Genesis cars, and forecast its sales this year will jump in top auto markets China and North America.

The South Korean currency rose about 7% against the dollar in the three months to December. A stronger won erodes the value of overseas sales for South Korean companies, and North America is Hyundai’s biggest market.

Hyundai, which together with affiliate Kia Corp is among the world’s top 10 automakers, said on Tuesday its fourth-quarter revenue rose 5% to 29.2 trillion won.

“Hyundai had a good fourth quarter, especially in the United States, where higher average-selling-price cars such as SUVs saw increasing demand as consumers shun public transit because of COVID-19 and low gasoline prices,” said Lee Han-joon, an analyst at KTB Investment & Securities.

Hyundai also saw solid demand for its cars last year in emerging markets such as India, despite the pandemic, but delivered a loss in the October quarter as it provisioned for a big engine-quality related bill.

Demand for its vehicles from car-rental companies that purchase in bulk is however still tepid, analysts said, although sales of its luxury cars remain a bright spot.

Hyundai is making a big push into electric vehicles (EVs) and has said it will introduce an EV-only platform in early 2021 that will use its own battery technology to cut production time and costs.

Analysts expect a boost to its EV sales this year despite a global recall of Kona Electric due to fires.

Recent news that Hyundai was discussing an electric car and battery tie-up with Apple Inc pushed up the automaker’s shares by the most in more than three decades.

Hyundai shares, up over a third this month, were down about 3% as of 0612 GMT versus the broader KOSPI’s 2% fall.