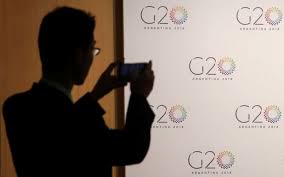 The world’s financial leaders sought on Monday to endorse free trade amid concerns over U.S. tariffs on steel and aluminium, while the United States said it could not sacrifice its national interests to make the system work.

Finance ministers and central bank governors of the world’s 20 biggest economies are meeting in Buenos Aires to discuss the global economic outlook, capital flows, cryptocurrencies like bitcoin, and how to stop corporate tax avoidance.

But since U.S. President Donald Trump’s decision on March 8 to impose tariffs of 25 percent on steel and 10 percent on aluminium, trade has become the focal point of the meeting.

“I am seriously concerned that the foundation of our prosperity – free trade – is being put at risk,” German Finance Minister Olaf Scholz told German mass-selling newspaper Bild.

“Protectionism is not the answer to the difficulties of our time. The situation is serious,” he said, adding that he would be cautious yet about referring to a trade war.

“There’s no doubt that the secretary represents the president’s very strong view that we believe in free trade,” one U.S. official told reporters.

“But the environment we’re in now, where the expectation is America totally subordinates its national interests in order for the free trade system to work, is just one we don’t accept. So, we’ve been very clear, we believe in free trade with reciprocal terms that leads to more balanced trade relationships,” he said.

On Sunday, Scholz said he would seek to dissuade Washington from imposing the steel and aluminium tariffs, which come into effect on March 23.

Others at the G20 meeting, which will conclude on Tuesday with a joint communique, shared Germany’s concern.

“There is a solid understanding among the global community that free trade is important,” Haruhiko Kuroda, Japan’s central bank governor, told reporters upon arriving for the talks.

The U.S. steel and aluminium tariffs have raised alarms among trading partners that Trump is following through on his threats to dismantle the trading system based around World Trade Organization rules in favour instead of unilateral U.S. actions.

Many U.S. allies, including the European Union, have sought the same exemptions that Trump has granted to North American neighbours Canada and Mexico, with some G20 ministers raising the issue with Mnuchin.

After meeting with U.S. Commerce Secretary Wilbur Ross in Washington, German Economy Minister Peter Altmaier said he and Ross agreed that U.S.-EU talks on the tariffs should be intensified.

“We are convinced that free trade is the best solution to guarantee the well-being of our peoples. We want that world trade remains fair and void of dumping measures,” Altmaier said.

CHINA TARIFF THREAT
Potentially broader anti-China tariffs and investment restrictions under consideration as part of a U.S. intellectual property probe have raised concerns that retaliation could hit world trade and choke off the strongest global growth since the G20 was formed during the financial crisis a decade ago.

Morgan Stanley economists said in a report to clients late on Sunday that a broad-based application of U.S. “Section 301” remedies resulting in a 20 percent tariff on Chinese manufactured goods, coupled with a commensurate response from China, would slash annual growth rates in both countries by a full percentage point within a year.

An early draft of the G20 communique seen by Reuters contained the phrase “international trade and investment are important engines of growth.”

It also said G20 finance ministers stood by an agreement reached by their leaders in July last year in Hamburg. A G20 official said discussions now centred on whether that language on trade would remain in the communique, which has to be endorsed unanimously, including by the United States.

The agreement from Hamburg, to which the Buenos Aires draft referred, said: “We note the importance of bilateral, regional and plurilateral agreements being open, transparent, inclusive and WTO-consistent, and commit to working to ensure they complement the multilateral trade agreements.”

The Hamburg agreement, signed by all G20 leaders including Trump, said G20 countries would fight protectionism including all unfair trade practices, although it also said they recognise the role of “legitimate trade defence instruments.”

“The problem is that everybody understands the Hamburg wording differently” a senior European official said.

Unilateral decisions by the United States to impose tariffs are seen as going against negotiated, or “multilateral” measures that would be part of the WTO. Yet the U.S. can also argue its tariffs are a “legitimate trade defence instrument.”

The draft G20 communique also said that while the global economic outlook has been improving, “a retreat to inward looking policies” – suggesting protectionist trade practices – was a risk to growth.