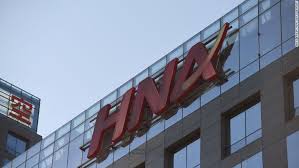 A mysterious Chinese company that spent billions to build a global investment portfolio just checked out of one of its big bets.
Hilton Grand Vacations(HGV) said in an SEC filing on Wednesday that Chinese conglomerate HNA Group had sold its 25% stake in the US timeshare operator for about $ 1.1 billion.

HNA started as a Chinese regional airline more than two decades ago but in recent years it went on a major overseas spending binge, racking up an estimated $ 100 billion in debt.

Now it’s selling assets to ease its financial pressures and as Chinese authorities crack down on heavy overseas spending by big companies.

HNA bought a $ 6.5 billion stake in global hotel operator Hilton Worldwide (HLT) in 2016. It inherited its stake in Hilton Grand Vacations when the business was spun off the following year.

The Chinese company said in early March that it also plans to sell “some or all” of its 25% stake in Park Hotels & Resort, (PK) another Hilton spin off which owns more than 50 properties across the US, Europe and South America.

HNA has not announced any plans to sell its interest in Hilton Worldwide.

The company’s asset sales are not limited to hotels.

More sales could be in the pipeline: As of the end of last year, HNA had about $ 240 billion in assets.

Related: China’s big conglomerates are no longer buying up the world

HNA is one of several companies from China that are scaling back their global ambitions under pressure from the country’s government.

Dalian Wanda — a real estate giant that owns real estate projects in cities like Los Angeles, Chicago and Istanbul as well as the the Hollywood studio behind “Jurassic World” and “The Hangover” trilogy — has been dumping its international properties.