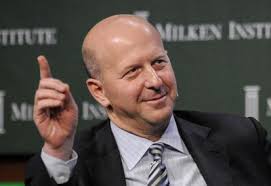 Schwartz, 54, will leave the firm on April 20, and Solomon will serve as the sole president and chief operating officer, the New York-based company said in a statement Monday. The statement didn’t give a timeline for Blankfein’s eventual retirement.

The question of Blankfein’s successor has been a topic of debate across the financial industry since Friday, when the Wall Street Journal reported that the CEO would step down as early as this year. Blankfein later tweeted that the announcement wasn’t his. The chief hasn’t given a timetable for his retirement, a person with knowledge of the matter said last week.

“I look forward to continuing to work closely with David in building our franchise around the world,” Blankfein said in the statement.

Solomon, 56, rose through the financing business after joining as a partner from Bear Stearns Cos. and ran the firm’s top-ranked investment-banking business for a decade. He has also taken on a leading role in the bank’s diversity push and initiatives to improve working conditions for young bankers. The part-time disc jockey, who attended Hamilton College, is also a wine collector and an avid skier.